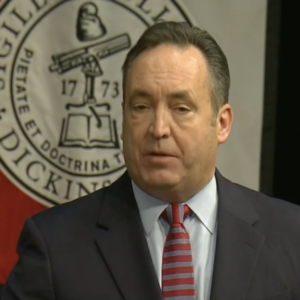 Senate Pro Tempore Jake Corman, who came within a whisker of dropping out of the governor’s race a few weeks ago, formally threw in the towel Thursday and threw his support to former Congressman Lou Barletta.

Corman never rose above single digits in the polls and was going to exit the campaign a few weeks ago, but said former President Donald Trump urged him to stay in the race. Corman had hired Trump campaign manager Kellyanne Conway to work on his campaign, and she even appeared in TV commercials on his behalf.

Corman may also have been under pressure from his fellow Pennsylvania Republicans to throw his support to Barletta as recent polls showed state Sen. Doug Mastriano (R-Franklin) surging. News reports suggested GOP party insiders are seeking a white knight candidate to save the party from Mastriano, whose right-leaning views may not play well in the general election against Attorney General Josh Shapiro, the Democratic candidate for governor.

When questioned by Delaware Valley Journal about his participation in a rally partially organized by the QAnon conspiracy theorists, for example, Mastriano abruptly ended the interview.

“Lou Barletta is the man at the right time at the right place for the people of Pennsylvania and I’m happy to be here today to support Lou,” Corman said at a Harrisburg press conference on Thursday. “At a time when Tom Wolf is leaving office with historically low approval ratings when the country and Pennsylvania are rejecting the Biden agenda, this is a time when we’re looking for new leadership.

“The only way that we will not be successful in the fall is if we nominate someone who can’t possibly win,” Corman added.

“I very much appreciate Sen. Jake Corman’s support and the difficult decision he made to withdraw from the race and work together for the benefit of Republicans and all Pennsylvanians,” Barletta said. “It is increasingly evident that Republicans must get behind one candidate who can win the nomination and then actually defeat Josh Shapiro in November. There is no question that as the Republican nominee, I can beat Shapiro because the people of Pennsylvania know me. I am proven, road-tested, and ready to lead the Great Pennsylvania Comeback.”

Some of the other Republican gubernatorial campaigns were quick to push back against Corman’s endorsement of Barletta.

“It’s no surprise that career politician Jake Corman, who implemented the highest gas tax in America, has chosen to endorse fellow career politician Lou Barletta, who is also a steadfast supporter of higher gas taxes,” said James Fitzpatrick, campaign manager for Bill McSwain. “Alliances between career politicians will do nothing but protect the status quo in Harrisburg. It’s time for a conservative outsider to end this nonsense. Bill McSwain will beat Josh Shapiro this fall and conservatives should immediately rally around his candidacy.”

Similarly, Bob Salera, campaign manager for Dave White said, “It should surprise absolutely no one that career politician Jake Corman would endorse career politician Lou Barletta – this is the swamp endorsing the swamp. Both Corman and Barletta have spent more than two decades on the public payroll, racking up massive taxpayer-funded pensions along the way.

“Both Corman and Barletta have repeatedly voted to raise taxes and voted for increased government spending at the taxpayers’ expense. Career politicians flock together, which is exactly why Pennsylvania needs to turn the page and elect an outsider like Dave White who will bring less talk and more action for the people of Pennsylvania to Harrisburg.”

Barletta, who was also the former mayor of Hazelton, is known for his early warnings regarding the effect of the influx of illegal immigrants. In a podcast, Barletta told DVJournal he would bus the illegals being flown to Pennsylvania to Biden’s home state of Delaware if he became governor.

While Trump has not endorsed anyone in the governor’s race, Barletta has touted his ties to the former president.

Barletta has also spoken out about inappropriate books in school libraries, favors expanding the state’s energy sector, and is against vaccine mandates. As a former small business owner, Barletta says he believes he can help bring more businesses and jobs to the commonwealth.