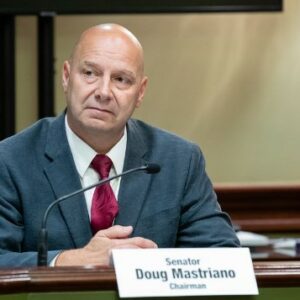 GOP gubernatorial candidate state Sen. Doug Mastriano abruptly ended a podcast interview with Delaware Valley Journal, angry over questions about his participation in a rally linked to QAnon conspiracy advocates. The Franklin, Pa. Republican also objected to questions about his participation in the infamous January 6 protest that preceded the riot at the U.S. Capitol. More than 750 people have been arrested for their role in the assault on the Capitol building.

“I resent the fact that you want to castigate anyone who went down to Washington D.C. on January 6th as some kind of enemy of the public. That is dangerous. You’re talking like an East German there,” Mastriano said to podcast host Michael Graham.

Mastriano touted his strong grassroots support during the interview, and political observers agree he has motivated hardcore Trump supporters in the race. The question is whether he can expand his appeal to more moderate voters in a general election against Attorney General Josh Shapiro, the likely Democratic nominee. How, for example, how does he plan to handle questions raised about his participation in the “Patriots Arise for God, Family and Country” rally last month, organized in part by believers in the bizarre QAnon conspiracy theory?

Rather than answer the question, Mastriano instead attacked the “left-wing media.”

“I want you to call out Josh Shapiro and scrutinize who’s in his audience or which groups he’s speaking with, or do you give him a free pass? That’s what I always see on the left. And I’m sick and tired of it,” Mastriano said. “If you’re gonna cast judgments and aspersions on people that I associate with, then by God, you better see what Josh Shapiro — I know [Lt. Governor John] Fetterman’s been in a room with some really radical people, especially with his bus tour around the state on recreational use of marijuana. They get a free pass every time. And so we’ve got to tighten this up.”

News Editor Linda Stein attempted to ask Mastriano about his pledge to do something about crime in Philadelphia, but he again brought the conversation back to questions about his participation in the controversial rally. After bemoaning the high crime in the city where the Constitution was crafted, Mastriano demanded, “How dare you castigate me for gathering with people?

“I don’t like the tone of this whole interview because it is so unfair. I hope you’ll do scrutiny on [Josh Shapiro], or are you just too lazy?

“‘Oh, you have conspiracy theorists there.’ Oh, Ok. Maybe,” Mastriano added. “So what does that matter? Do you try and discredit me?”

When the conversation turned to his general election plans for handling questions about his allegations the 2020 election was stolen from former President Donald Trump — a claim that has not been substantiated by the available evidence — Mastriano ended the interview.

Delaware Valley Journal has interviewed many of the gubernatorial and U.S. Senate candidates from both sides of the aisle and hosted a debate among Republicans in the Senate race. No other candidate has walked out on an interview or debate.

The podcast audio is below. Readers are invited to listen for themselves. Please send your comments/reaction to [email protected]