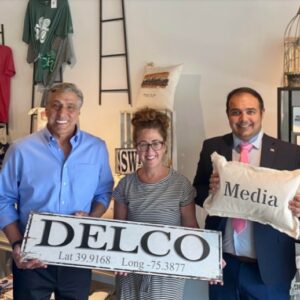 Lou Barletta (wearing a blue shirt) on a campaign visit to Media.
News

During a recent campaign stop in Media, Lou Barletta, the former congressman and mayor of Hazelton, said his experience in government and business make him the best choice for Pennsylvania governor.

In an interview with Delaware Valley Journal, Barletta touted a new technology that will extract rare earth minerals from anthracite coal and coal waste Penn State and a Texas company are piloting. “We have so much energy, so many natural resources here in Pennsylvania that we can attract good-paying manufacturers here to Pennsylvania with our natural gas and coal, with rare earth minerals. We have them in our anthracite coal and, not only in the coal that’s in the ground but in the waste piles that are scarring the ground.”

Rare earth minerals, some 85 percent of which are exported from China, are used in a variety of technology products from cellphones, computers, wind turbines, electric vehicles to missile defense. While there are a handful of mines in the U.S., having a source for these components other than a geopolitical adversary would be beneficial.

“That is going to be a priority,” said Barletta.  “If we can produce these minerals, we are going to produce a lot of good jobs here.”

Barletta said that watching Gov. Tom Wolf’s policies unfold during the pandemic spurred him to enter the 2022 governor’s race.

“I could not sit back and watch how Gov. Wolf has handled the pandemic, the draconian lockdowns, that hurt so many so many small businesses,” Barletta said. “How many children have had a year of their education stolen from them — and the long-term effects we still won’t know — and how he  put  COVID positive seniors back into nursing homes that accounted for 50 percent of deaths in Pennsylvania.”

“I was a small business owner myself, and I can’t imagine what these businesses went through and that Gov. Wolf thought he had the power to pick and choose who can get a waiver and who had to close, it was too much for me to sit and watch,” Barletta added.

Asked why Delaware Valley Republicans should vote for him in the primary, Barletta said, “I have a record of service as a mayor for 10 years. My qualifications are something I’m very proud of.   My eight years in Congress and the issues I’ve made my priority are well suited to run the state, the commonwealth, and my time as a business owner. I believe my experience makes me the best candidate.”

“I’ve found success at every level,” he added. “and I want to bring that to the commonwealth, too.”

Asked about his priorities, Barletta responded, “The economy, no question. We’re going to open out our economy. That’s what people care about. They want to take care of their families.  We’re going to help small businesses. Small businesses are the backbone of so many communities.  I know that first hand as mayor, how important it is.”

Barletta said he would also focus on education and infrastructure.

Asked if he noticed how bad the roads are in the Delaware Valley, Barletta replied, “My car feels that every bounce.” He noted good infrastructure is “important for growth.”

When Barletta was the Hazelton mayor from 2000 to 2010, he was known as a hard-liner on illegal immigration. Along with the city council, Barletta passed a law to fine landlords who rented to undocumented immigrants and fined businesses that hired them. The U.S. Supreme Court struck down those laws in 2014 after a challenge from the A.C.L.U.

Barletta has experience as a statewide candidate, having run unsuccessfully against incumbent Democrat U.S. Senator Bob Casey in 2018.

The U.S. is currently on track for a 20-year high for illegal border crossings, with more than 381,000 arrests since October. Of those 82 percent were single adults while the number of unaccompanied children rose by 90 percent, according to the Wall Street Journal, Barletta said the federal government should address it.

“That problem doesn’t remain at the border,” said Barletta.  “It ends up in communities all across America. It needs to be fixed at the federal level. Their lack of doing anything about it has created the problem.”

However, Barletta steered the conversation back to his focus on jobs, the economy and “giving people their freedom back” in the wake of the pandemic lockdowns.

Barletta, a gregarious politician, said he enjoyed speaking with business owners in Media and hearing their concerns.

“Media is a fantastic community,” he said. “It’s very vibrant. I understand what’s important to these communities,” he said. “Their biggest concerns were the damages these shutdowns caused.”

Barletta also voiced his support for the police, who have come under fire from progressives nationwide in the wake of the death of George Floyd in Minneapolis.

“I want to restore respect back to the men and women in law enforcement, our police,” he said. That’s “very, very important.” And, he said, respect for law enforcement starts at the top, in the governor’s office.