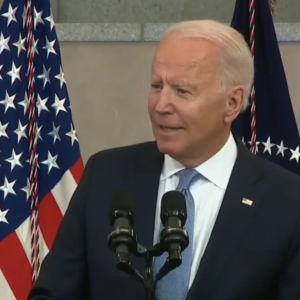 BARLETTA: Biden’s Vaccine Mandate is Unconstitutional and Should Be Stopped

Even if you believe that the coronavirus vaccines are safe and effective, and that people should make the choice to receive them, you can still believe that it’s not the federal government’s role to compel people to get the shots. In fact, it’s clear that President Joe Biden’s vaccine mandate is unconstitutional.

Biden has ordered the Department of Labor to issue a rule that will require businesses with more than 100 employees to demand that workers either get the vaccine or submit to weekly testing. The cost of any testing program for many businesses would be so high that this option will not really be on the table. This will affect about 80 million people working in the private sector who didn’t know that the president of the United States is their new director of human resources.

Biden’s decree will also cover federal employees and contractors, plus state and local government workers (including teachers and school staff), and workers in healthcare facilities receiving reimbursement for Medicare and Medicaid.

The U.S. Supreme Court has addressed the issue of mandated vaccines in the past, although it has been in the context of states ordering the shots. The court has found, in two key rulings in 1905 and 1922, that state and local officials may impose vaccine mandates. Indeed, Pennsylvania, like all other states, requires a host of immunization shots before children can attend school.

However, with few exceptions, “there are no laws that allow the federal government to issue a vaccine mandate to the general population,” according to the National Constitution Center in Philadelphia. Such a dictate would face legal problems “based on the 10th Amendment’s prohibition on commandeering or forcing states to use their own resources to carry out federal policies.”

More recently, the Supreme Court rejected Biden’s attempt to use the Centers for Disease Control to enact an eviction moratorium during the pandemic. This was a clear check – just last month – on the powers of the Executive Branch to impose its will on the private sector.

Blindly directing that everyone must receive the shot is also a one-size-fits-all approach that ignores science. Biden’s order makes no allowance for natural immunity, which exists in people who already have had COVID-19. A number of studies have shown that natural immunity provides “equal to or better” protection for people as compared to the vaccine.

And in what universe does it make sense to impose such a mandate on the American people, while not requiring it of illegal immigrants flooding across our southern border?

Notably, there are several high-profile figures who have previously stated publicly that the federal government has no business issuing a vaccine mandate. Their names are Joe Biden, Nancy Pelosi, and Jen Psaki.

Just before he took office, Biden rejected the ideaof compulsory vaccination, saying, “I don’t think it should be mandatory. I wouldn’t demand it to be mandatory.”

In April, Speaker Pelosi answered a question about ordering members of the House of Representatives to be vaccinated. She said she did not have the authority and broadened it to include the country at large.

“We cannot require someone to be vaccinated. That’s just not what we can do. It is a matter of privacy to know who is or who isn’t,” Pelosi said. “We can’t require vaccinations for the members, much less for the American people.”

Psaki, the White House press secretary, who presumably speaks for the president, said on July 23, “that’s not the role of the federal government; that is the role that institutions, private-sector entities, and others may take.”

But now that someone has convinced Biden that he can coerce private citizens to inject the vaccine into their bodies, all of those concerns are gone.

Democratic governors, like Pennsylvania’s Gov. Tom Wolf, have already killed thousands of small businesses and many more thousands of jobs with their unnecessary and excessive lockdowns. If Biden’s vaccine mandate stands, how many more people will be fired or quit because of vaccine hesitancy?

There are already reports of workers leaving their jobs over the issue. One New York hospital has stopped delivering babies because too many employees quit over the state’s mandate on health care workers. Hardened opposition to the vaccine among those already skeptical is a very real possibility.

Governors who care about federal bullying, the privacy rights of their citizens, and the ability of people to make their own healthcare decisions will fight Biden on this. A number of states have already announced their intentions to go to court over it.

But I’m afraid we know that Gov. Wolf will not defend us, nor would his would-be successor, Attorney General Josh Shapiro.

When I’m governor, I will stand up for Pennsylvanians and stop such federal overreach.