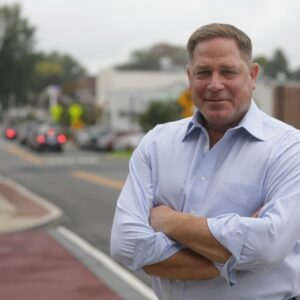 Delaware County guys have a reputation for being outspoken and ready for anything. Those attributes may serve former county Councilman Dave White well, as he elbows his way in the crowded race for the 2022 GOP nomination for governor.

White, 60, is not deterred by the competition.

He says he believes he has the right combination of ideas to appeal to the voters, focusing on jobs, education, and safety.

White, who owns a mechanical, contracting, plumbing and HVAC business that employs 80 to 85 people said he knows about job creation firsthand and has “signed the front side of paychecks and paid good wages.” White got his start as a pipefitter and would like to bring back an emphasis on vocational education as a pathway for many students to obtain high-paying jobs.

Asked about his accomplishments while serving on council, White pointed to the rescue of three refineries—in Marcus Hook, Linwood and Philadelphia—that now process natural gas from the Marcellus Shale in western Pennsylvania.

The council went after state and federal grants to save those refineries, he said. That, in turn, saved thousands of jobs.

“They closed and we got them back up and operational,” said White. “When we got them up and running, there were more jobs there. We were ninth in the state for wage growth.”

The extracting natural gas from the shale formation is “a very, very good opportunity” for Pennsylvanians, he said. “These jobs start at $80,000, $90,000, $100,000.” And that money spreads throughout the economy leading to more jobs in other sectors, as well.

“As long as we have the can-do attitude,” said White, who described himself as “very optimistic.”

“We need to release what Pennsylvania residents can do and we’re going to,” White said.

“I’m a big proponent of it,” White said about the pipeline. “It’s the safest way to transport that gas and it’s being built by good quality men and women.”

White said he’s for energy sources from “all of the above,” including solar and wind power. But natural gas is “clean-burning energy.”

“We have more resources than anywhere in the world except Saudi Arabia,” he said. “It’s an important part of growing this economy in the state.”

“I’m all about the fracking,” said White. “That’s a big part of Pennsylvania’s future.”

“We need to live within our means,” White said. “I learned that as a business owner.”

White believes in “making sure we fund our police.” He noted there have been more than 400 murders in Philadelphia this year, a record number. “That’s just out of control.”

We need to “respect and honor our police. They can’t do their job unless we respect and fund them,” he said.

White and his wife, Debbie, have been married for 38 years and “still live in the same house” in Ridley Township where they raised their four children. They have three grandchildren.

About 1,600 people came out on Saturday when White announced his campaign for governor. And some of those supporters commented on Facebook.

“Good luck, Dave! You can count on our vote,” said Mindy Paolella.

On Monday, White set off on a drive across Pennsylvania to rally support and introduce himself to voters around the state, joining other Republican hopefuls in making that trek.