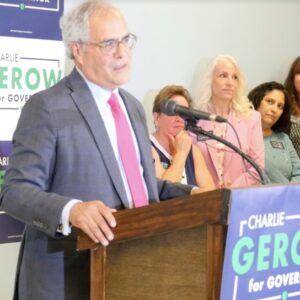 Charlie Gerow, a long-time Pennsylvania lawyer, political pundit and advisor, recently joined the race for governor, pledging to be a conservative voice for the people and a force for economic growth.

Although he now lives near Harrisburg, Gerow grew up in Warminster. Born in poverty in Brazil, he was adopted by missionaries and brought to the U.S.

“You know my [Delaware Valley] roots run very, very deep,” he said in a podcast interview with Delaware Valley Journal. “My favorite childhood memory is Wilt Chamberlain and the Philadelphia 76ers winning the World Championship with the best record of the NBA. At that time, my worst memory, it’s when the Phillies lost the pennant in 1964. I was in, I think third grade, and I cried myself to sleep.”

As a boy, Gerow liked to hang out at the Maple Street playground and shoot hoops.

Gerow got his start in politics serving on former President Ronald Reagan’s campaign staff, and continued to work for Reagan for the next 25 years.

“I’m running for governor because I know we need a conservative who can win in the battle for our ideas, win in the media, who can beat [Attorney General] Josh Shapiro on the debate stage and who will carry our values in the governor’s office,” Gerow said when announcing his candidacy.

“I do not think one more entrant makes much difference on the Republican side,” said Professor Robin Kolodny, who chairs the political science department at Temple University. “The issue is that there is no clear front-runner.  Gerow is an insider from the traditional mainstream conservative vein – more like Tom Ridge than Donald Trump.  Some people will be interested in his candidacy for that reason, but enough to have him stay until November or so?  Probably not.”

Name recognition could be a factor.

Berwood A. Yost, director of the Floyd Institute for Public Policy and the Center for Opinion Research at Franklin & Marshall College, noted, “Anything is possible in a crowded primary, but I don’t believe that Mr. Gerow is well known outside of central Pennsylvania. Having no prior experience running for statewide office is probably also a limiting factor for him (he has run for office before–an unsuccessful run for Congress, I believe). That said, he is certainly well-known and well-connected among conservative groups, which could help him fundraise.  Ultimately, these primary races will turn on fundraising and campaign organization.”

Kolodny added, “While everyone seems to have this race as a clear toss-up, I would give the Democrats the edge for two reasons:  2020 [and] Josh Shapiro.”  While Shapiro has not officially declared his candidacy, it’s widely believed that he will be the Democratic standard bearer.

“Historically, both parties have been very weak statewide in that they could not play an effective gatekeeper role,” Kolodny said.  “However, Shapiro has been very shrewd about how he planted his stake in this space years ago, but then kept supporting others in the party for their ambitions and now they feel good about him.  Look at the 2020 returns.  Shapiro got more votes than Biden.  Yes, really.”

As for the GOP, “The longer it takes Republicans to coalesce behind a nominee, the worse it gets for them,” Kolodny said.

In addition to his political expertise, Gerow is touting his experience as a successful small businessman. He’s the CEO of Quantum Communications, a strategic communications firm, based in Harrisburg, and he has been a conservative voice on television and radio, as well as writing a column for the Harrisburg Patriot News (PennLive).

While at Quantum, he’s represented business and government leaders and been named to the Influencers 500 list by “Campaigns and Elections magazine. He’s also been named one of the 50 most influential Pennsylvania Republicans by Politics Magazine. Among other accomplishments, he serves as first vice chair of The American Conservative Union and on the board of directors of The Freedoms Foundation at Valley Forge. President George W. Bush appointed him to the Benjamin Franklin Tercentenary Commission.

Gerow, 66, is a life member of the NRA and has worked for pro-life organizations. He’s the father of two sons and a daughter, who are all young adults.

“What’s missing in this state is a governor who can make things happen. I thought, who is it in this state that can not only win an election but govern our citizens in the manner in which they deserve to be governed? The name that came to my mind was Charlie Gerow. So I picked up the phone and said, ‘Charlie, you need to run for governor.’”