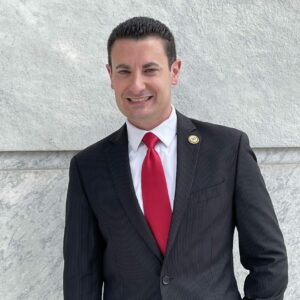 Joe Gale, 32, now in his second term as Montgomery County commissioner, and his brother Sean Gale, 30, a lawyer, have both thrown their hats into the ring for the 2022 election cycle. Joe Gale is running for governor and Sean Gale for U.S. Senator, a seat being vacated by Sen. Pat Toomey. The current governor, Tom Wolf, is term-limited.

The Republican brothers grew up in Plymouth Township and still live there. Neither is married.

“Fortunately, that allows me to dedicate the time necessary to win this Senate race,” said Sean Gale.

While their parents were not politically active, Joe Gale said he and his brother were raised with “strong conservative values.”

“Unlike my predecessor, Bruce Castor, who was a lapdog for the Democrats, I’m a watchdog for the taxpayers,” said Joe Gale, who at 26 became the youngest commissioner ever elected in Montgomery County.

Joe Gale said he knew Trump was going to win in 2016 when the former president first announced his run. And, like Trump, he styles himself as a political outsider who is “frustrated with politics as usual.”

“I definitely tapped into the same nerve of people looking for a disrupter,” he said.

The brothers have been running a statewide campaign without the Republican Party’s backing. They hold grassroots “Cup of Joe” meetings in people’s homes to build momentum for the primaries in the spring.

That is the same method he used to win his seat on the three-member county Board of Commissioners. The other two seats are held by Democrats Val Arkoosh, who is also running for the Senate, and Kenneth Lawrence Jr.

“I’ve developed my own network outside the party,” said Joe Gale. “I’ve always been a registered Republican even though I never had the backing of the party.” He noted that in Pennsylvania, the primaries are open only to members of each party.

“In addition to that, I’m an anomaly to these political hacks, all these insiders, it boggles their minds, how I over-perform,” Joe Gale said. “I do significantly better in the general election. I am not supposed to exist as a social conservative in the Philadelphia suburbs.”

There is a “misconception that independents are moderate. They’re not. I have the ability to fire up the conservative base. Independents and conservative Democrats gravitate toward my positions. It also positions me to be the only Republican who can defeat Josh Shapiro (the presumed Democratic candidate for governor.)”

Joe Gale graduated from Temple University where he earned a degree in finance and real estate. He worked in the County Recorder of Deeds office as a recording clerk and also in the mortgage division of one of the country’s largest home building corporations, NVR Inc.

Sean Gale, who has never held elected office but ran unsuccessfully for county commissioner in 2019, practices business and health care law. He holds an undergraduate degree in business from Temple University, earned his law degree from Villanova Law School, and a master’s degree in health care and pharmaceuticals from Drexel University.

Asked why he decided to run for the Senate, Sean Gale said, “Pat Toomey has been a decade-long disappointment to conservative Republicans across Pennsylvania. However, his decision to convict President Trump at the Democrat’s witch-hunt impeachment trial was the straw that broke the camel’s back and compelled me to run for the very Senate seat Pat Toomey has stained and disgraced.”

“As fate would have it, I turned 30 on February 15, two days after Sen.Toomey stabbed Donald Trump in the back. I am now old enough to be a senator and no longer have to sit on the sidelines, complaining and throwing my shoe at the television,” he said.

Asked why he did not try local politics first, Sean Gale said he lives in a heavily Democratic township, where he is not likely to win. However, he believes he has a shot at the Senate, which is a statewide election.

“My platform is simple: I am not another Pat Toomey. Pennsylvania deserves a U.S. Senator who is pro-life, pro-2nd Amendment, pro-small business, pro-shale, pro-pipeline, pro-border wall, pro-Trump and, most importantly, not controlled, influenced, or endorsed by Republican Party bosses,” Sean Gale said.

Asked what he thinks is the most important issue for Pennsylvanians, he said, “By far, the number one issue facing not just Pennsylvania, but the nation, is election reform. This involves requiring voters to show government-issued photo identification, ending universal no-excuse mail-in voting, and restoring traditional absentee voting that is predicated on a documented excuse, a verified signature and postmark, and strictly enforced deadlines.”

Sean Gale promised to advocate for conservative issues, if elected, and to vote to oust Mitch McConnell (R-Ky.), who has served in the Senate for 36 years, from party leadership.

Older brother Joe Gale espouses similar positions, including being pro-life and supporting the 2nd Amendment. And he is also pro-small businesses, pro-pipelines, and pro-Trump. He also favors election reform to eliminate the no excuse mail-in voting and mandating voter identification.

The elder Gale has been a lightning rod for controversy during his tenure as a county commissioner. For example, he took heat for calling Black Lives Matter “a radical, left-wing hate group” and “perpetrators of this urban domestic terror” after riots in cities around the country in response to George Floyd’s death at the hands of a Minneapolis police officer.

A group of constituents had sued Joe Gale after he blocked them on social media. The suit was settled in Sept. 2020 with residents again allowed to follow Gale’s social media accounts.