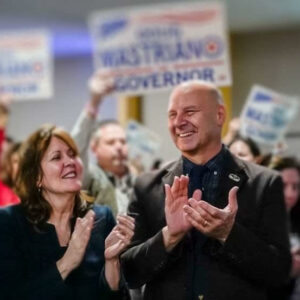 The governor’s race also had a bombshell drop as the finish line comes into view. On Saturday, Trump endorsed state Sen. Doug Mastriano. 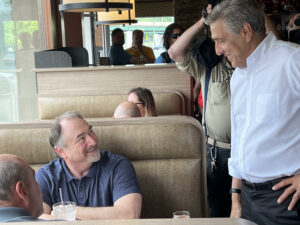 Spencer Kimball, Executive Director of Emerson College Polling said, “Among those who have already voted, Mastriano has 13 percent, but his support rises to 37 percent of those who plan to vote on Election Day. His opponent, Barletta, is getting about an equal share with 25 percent of the early vote and 21 percent of the Election Day voters.”

On the Democratic side, AG Josh Shapiro is running for governor running unchallenged.

Meanwhile, Barletta campaigned at the Penrose Diner in South Philadelphia on Monday. He spoke to patrons and talked to the press and argued that he is the best candidate to beat Shapiro in the fall.

When Barletta announced that he was running a year ago he predicted the race would be between him and Mastriano.

“And here we are the day before the election and that’s who it’s come down to,” he said. The Emerson poll “shows it’s still a two-person race, myself and Doug Mastriano. There’s a lot of undecideds. And there’s also the fact that when people go to the polls they’re going to realize, they may have supported one of the other many candidates, that their only chance to beat Josh Shapiro will be myself. So even though they may have polled for someone else along the line, when they get to vote, they’ve got to make that decision. Does their vote count if they vote for someone else?”

“I think I have a very good chance,” he said.

Asked about President Trump’s endorsement of Mastriano, Barletta said, “I think he made a mistake. But I’ll take his endorsement on Wednesday.” Barletta, when he was in Congress, was an early Trump supporter.

“The fact is, he can’t and won’t win the primary and therefore has zero chance of winning the general election.  The people will decide and will give us a huge mandate,” said Mastriano.  Mastriano served in the Army for 30 years, prior to becoming a state senator for Franklin County.

Berwood Yost, director of the Franklin & Marshall poll, said that Mastriano “is leading this race based on widespread grassroots support.”

“I think the hope among more mainstream candidates that they can consolidate support behind a single candidate other than Mastriano comes too late in this race to make much of a difference,” said Yost.  “Remember, the state reported that nearly a half-million primary ballots had been returned as of last Wednesday, so those votes have been cast.

“And even if some candidates have left the race, their names will still appear on the ballot. Barletta may benefit from the undecided voters breaking his way, but recent polls suggest he might be trailing Mastriano and McSwain.  I think there are simply too many candidates in the race for them to overtake Mastriano, especially after receiving former President Trump’s endorsement.”

“We need to remember that polling in primaries is notoriously difficult for many reasons, so lots of things could happen tomorrow.  Still, Mastriano seems best positioned right now to win,” said Yost.

Meanwhile, two other candidates, Sen. Jake Corman and former Congresswoman Melissa Hart, dropped out and threw their support to Barletta.  And the prestigious Commonwealth Partners Chamber of Entrepreneurs changed its endorsement from Bill McSwain to Barletta. Commonwealth CEO Matt Brouillette called for McSwain and Dave White to withdraw from the race and support Barletta.