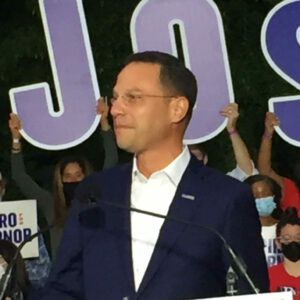 About 200 supporters cheered and applauded Josh Shapiro at a campaign rally on the Penn State Abington campus Wednesday evening.

Earlier in the day, the state attorney general announced his candidacy in Pittsburgh and via video. In a speech that at least one observer likened to former President Barack Obama’s cadences and gestures, Shapiro touched on his campaign’s key points, including “change,” transparency, competency, social and environmental justice, and  promoting organized labor so that “every worker has the right to join a union.”

Shapiro, 48, said while serving as a state representative for Abington and Upper Dublin he “learned to be a voice for the people, knocking on 18,000 doors.”

“When I became the first Democrat to lead Montgomery County in 150 years, the county wasn’t working when we took over,” the former chair of the county Board of Commissioners continued. “Partisan bickering and budget scandals and massive budget deficits were holding us all back. But we didn’t listen to the people who said, ‘That’s the way it’s always been done.’ We rolled up our sleeves, we got to work, and we turned county government around. We not only put the county back on stable footing while we were in charge. We helped restore our AAA bond rating, fired the Wall Street money managers so we could save millions and protect the retirement of our seniors.”

As attorney general, Shapiro says he fought “the powerful and the well-connected.” He touted his grand jury investigation into the Catholic clergy and the church’s cover-up that brought some 300 pedophile priests to light and his litigation to obtain money from pharmaceutical companies that sold addictive opioid medication.

“I want you to know that I will stand up to anyone who abuses their position,” he said. “I will not back down from that fight.”

He also said he championed the people’s right to vote that “came under attack from the most powerful office on earth.”

“When they went to court to prevent our votes from being counted, we stopped them,” Shapiro said. “We stood up to their mobs and we won in court to protect the will of the people every single time…We will continue to protect the right of Pennsylvanians to vote.”

He also promised to help businesses grow and families “keep a roof over their heads.”

Shapiro added he would make sure every child has access to a good education “no matter what ZIP code you live in,” and that everyone has access to physical and mental healthcare.

Shapiro pivoted to attack his Republican opponents, saying they are not focused on these “challenges.”

“Instead they’re peddling the ‘Big Lie,’ they’re passing far-right litmus tests, and they’re pandering, pandering out of a profound weakness,” Shapiro said. “The private personal information of nine million Pennsylvania voters, that’s what they’re up to…Not only are they doing real damage to our democracy but they’re holding us back from meeting this important moment.”

He promised to “repair our roads and bridges and connect every Pennsylvanian to the internet from Waynesburg to West Philly.” He said the state should use its “first-class universities” to become a center for research and innovation and promised to promote vocational education, as well.

“Let’s lead the way on energy because we shouldn’t have to choose between protecting our jobs and protecting our planet, that’s a false choice. We need to invest in clean energy and create jobs in Pa. We need to protect every Pennsylvanian’s constitutional right to clean air and pure water.”

Shapiro also pledged to bring people together and work across the aisle. 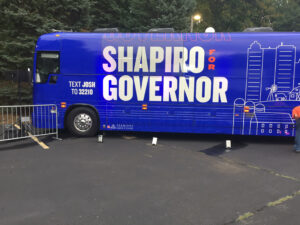 “I am sick and tired of hearing that we’re Philadelphia and Pittsburgh and Alabama in the middle,” said Shapiro. “That is simply not true. That is not who we are.”

Republican gubernatorial candidate Charlie Gerow, a political consultant and business owner, called on Shapiro to resign from his post as attorney general.

“Josh Shapiro has never finished a job he asked the voters and taxpayers for and now he’s running for governor just months after being sworn in,” said Gerow. “Josh Shapiro must be honest with the taxpayers who pay his salary and admit that he has no interest in the job he asked for but wants to campaign for another office while staying on their payroll.  He should immediately resign as attorney general.”

Republican Bill McSwain, the former U.S. Attorney for southeastern Pennsylvania who is also running for governor said, “Josh Shapiro is a career politician who supports higher taxes, bigger government, more regulation, less freedom, and lawlessness. Dedicated to prioritizing his own career over the needs and desires of Pennsylvanians, Shapiro stands for the continuation of the same failed economic and public safety policies of liberal Governor Tom Wolf and would provide no new solutions to put Pa. on a path to prosperity.  Pennsylvanians deserve a governor who will put their needs first, and who views the office as an opportunity to enact positive change, not as a mechanism for his own professional advancement. It is time for a governor who will stand up and show up for our citizens, and I plan to be that governor.” 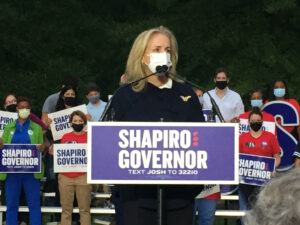 U.S. Representative Madeleine Dean (D-Montgomery) was among those who introduced Shapiro to the crowd. She promised Shapiro would protect abortion rights.

“Josh knows we have to protect our democracy, our elections, and the fundamental right to vote,” she said, praising his defense of the 2020 election results. “That fight continues. That’s why we need Josh more than ever.”

“So much is at stake,” Dean said. “As John F. Kennedy said, ‘The rights of every man are diminished when the rights of one man (are) threatened.’ That’s true for you and me. The threats continue but the opportunity is right here in front of us. That’s why Pennsylvania needs and deserves Josh Shapiro to be the next governor.”

Abington resident Fran Earley said he has known Shapiro since he got into politics and finds him to be “focused.” “He has time for you and I find that important,” said Earley.

Marianne Gassman of Glenside called Shapiro “very fair-minded (and) terribly pragmatic. He’s just got a lot of common sense and he can work with both sides of the aisle.” 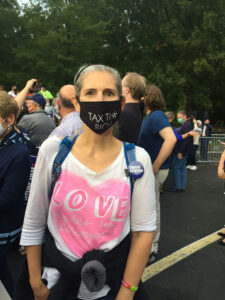 Ali Feldman, of Ambler, who was wearing a “tax the rich” facemask said Shapiro is “driven” and “has integrity.”

“He fights for what’s right,” Feldman said. “He’ll build a better future for all of us.”