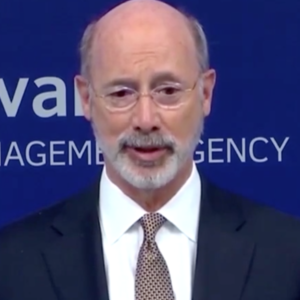 At a Monday news conference, a member of the media asked Wolf a question that came from a small business owner.

“If we have employees that are currently laid off and we call them back to work and they tell us that they don’t or won’t come back because they’re getting paid more with unemployment and the $600 bonus, what can we do?” the  business owner wanted to know. “Can their unemployment be revoked?”

“No,” said Wolf. “And as a former business owner, if you ever face that kind of situation, there’s one really simple thing you can do as a business owner and that is raise the compensation of your employees.”

“The chief executive had mandated that these businesses shut down for nine weeks — if he opens up when he says he’s going to on May 8 — and then his comment is so irresponsible that he can say ‘Oh! When you open up after being shut down, we think you should pay people more if you want them to come off unemployment?'” Barrar said.

People who are out of work due to coronavirus-related shutdowns are eligible for the normal Pennsylvania unemployment payment, plus an additional $600 a week thanks to federal legislation passed in response to the economic emergency.

Wolf’s remarks landed the same day roughly 2,000 protesters descended on the capitol building in Harrisburg demanding the government move faster to reopen parts of the state economy. “We want to work!” was the common refrain.

Wolf recently extended his stay-at-home order to May 8.

Additionally, unemployment in the Delaware Valley has surpassed jobless numbers from the 2008 Great Recession, and more than 1.5 million people statewide have filed for unemployment since March 15, according to the state.

“It shows how out of touch he is with the normal, average, everyday business owner in this state,” Barrar added. “The government shut them down, they didn’t shut down on their own, they shut down because the government told them they had to.”

“The governor’s point was that we all depend on those workers now more than ever and they deserve a safe work environment and living wage, which is why he has proposed a minimum wage increase each year he has been in office, among many other proposals to improve working conditions for workers,” Penny Ickes, communications director with the Department of Labor and Industry, told ABC27 News.

“In the legislation, it does stipulate that you only qualify for the unemployment benefits if you can’t work, if you’ve been laid off or you’ve been fired, or your company has gone out of business,” Toomey said on Philadelphia’s Morning Answer with Chris Stigall. “There has to be a lost opportunity there. And if you have an offer to come back to work, you’re not eligible for this. But I think we just heard just to the extent to which that’s going to be enforced.”

The Pennsylvania Department of Labor and Industry did not respond to a request for comment seeking clarification on whether a worker would be able to resist returning to work.

“Contrary to what the Pennsylvania governor says, it is not good for the economy to pay people more not to work than actually work, and that’s what we’re doing,” South Carolina Senator Lindsey Graham (R) said on the Sean Hannity Show.

“This has become a magnet to draw people out of the workforce. We’ll never have an economic recovery until we fix this,” Graham said. “You should get 100 percent of your wages up to $50,000, but you should never be paid more in unemployment than your employer pays you because that really skews the whole economy, and this guy in Pennsylvania doesn’t get that. I bet a lot of people in Pennsylvania do.”

Graham then began driving the controversy towards the presidential election.

Graham is referring to a tweet from the New York congresswoman — “You absolutely love to see it” —  celebrating likely energy sector job losses due to plunging oil prices. Ocasio-Cortez later deleted the tweet.

Energy jobs were key to Pennsylvania’s emergence from the 2008 Great Recession, and many believe the same jobs will provide a lifeline out of the current economic crisis. The sheer number of high paying jobs has made energy a key campaign touchstone in the 2020 presidential election, with some analysts saying Joe Biden cannot win the state without support from the industry.

A survey released Wednesday from Change Research shows 53 percent of Pennsylvanians “strongly” or “somewhat” approve of Wolf’s handling of the coronavirus crisis, while 47 percent disapprove.

KING: How I Came To Fall for Taylor Swift Big… Read More

By Kevin Mooney on January 25, 2022
A Pennsylvania court may strike down a labor law that is clearly unconstitutional, but elected…
Read More
News

By Linda Stein on January 25, 2022
Hispanics are the fastest-growing minority in the United States and the GOP has had some…
Read More