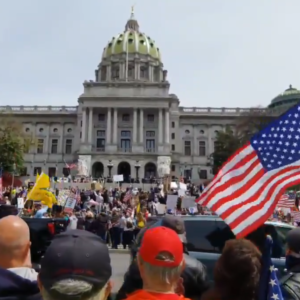 It was a scene State Rep. Steve Barrar (R-Chester/Delaware) never thought he’d see: Thousands of his fellow Pennsylvanians rallying state government — not for a program, benefit or giveaway, but for the chance to just go back to work.

“I have very mixed emotions because it’s a Monday,” Barrar said. “I would much rather those people be at work. But they’re here today asking for the government for permission to go to work, something I thought I would never, ever see in my lifetime as an American, especially as a member of the [Pennsylvania] House of Representatives.”

Barrar was one of 10 Republican state reps from the Delaware Valley delegation who voted last week to begin loosening restrictions and allowing more economic activity. The bill passed both chambers but was vetoed by Gov. Wolf, according to Barrar.

“I’m probably getting a thousand emails every three days,” Barrar said. “Half of the emails coming in are from small business owners saying, ‘Give me the opportunity to get open. Give us the opportunity to comply with the guidelines from the CDC and allow us to work. We’re losing our businesses.'”

One of those emails could have come from Russ Snyder.

Snyder’s Chester County business, Universal Contracting, has hit one bureaucratic wall after another in its struggle to survive the COVID-19 crisis. After applying for the Paycheck Protection Loans (PPP) passed by Congress, Snyder was turned down because his credit union wasn’t an approved bank for deposit.

By the time he applied again, the funds had run out, he said. At the same time, two of his three employees have filed for unemployment, one got a claim, the other didn’t. And, Snyder says, none have received the $1,200 coronavirus relief checks they thought would arrive last week.

Barrar’s hearing that, too. “I’m getting no less than 20 to 30 people [a day] who are totally unable to get through to the unemployment compensation bureaus.”

Snyder didn’t attend Monday’s #ReopenNOW rally in Harrisburg, but he’s one of the Delaware Valley business owners who supports the cause and agrees it’s time for more action on reopening the economy.

“One of my employees hasn’t got any money,” Snyder told Delaware Valley Journal. “I need to pay them something, and I’m running out of money now. I have cash reserves, but now I’m starting to run out of that.”

Snyder also rejects the argument that’s the debate is a simplistic choice between the economy being either wide open or entirely closed. “We need to stop having a kindergarten mentality,” Snyder explained. “What I mean by that is, saying  ‘If one person can’t do it [open their business safely], nobody can do it.”

“That’s not the case here,” Synder continued. “I get it that, if there’s a thousand workers on a job, you might not want that. You might not want a thousand people in an enclosed building. But we’re outside on the job, and we’re each in an individual piece of equipment.”

Barrar is sympathetic to that idea, but he’s been frustrated by the more selective approach as applied by Wolf.

“The governor, what he deemed ‘essential’ versus ‘non-essential’ really makes no sense and there’s no science to it,” Barrar said. “Within the businesses he deemed ‘non-essential’ he allowed dozens and dozens of waivers in that category to open up.”

“And the fact that he refuses to allow that list [of waivers] to be public at this point in time adds a lot of suspicion that the governor is picking winners and losers, and that’s not the way this should work.”

The governor did update his plan to reopen the commonwealth’s economy on Monday, and the plans partially address some of Snyder’s and Barrar’s complaints. Limited construction will be allowed to resume on May 8, “in accordance with safety guidance that will be issued by the administration shortly,” according to the governor’s website.

Barrar did say he would have preferred to see more of the protestors wearing face masks, noting that he suffers from a heart condition and that concerns him if he were to contract the virus himself.

The protests in Harrisburg come close on the heels of similar protests over the weekend that reached from Colorado to North Carolina to New Hampshire.

President Trump defended the protesters during Sunday’s coronavirus press briefing, saying “some governors have gone too far,” and describing the protesters as “a very orderly group of people.”