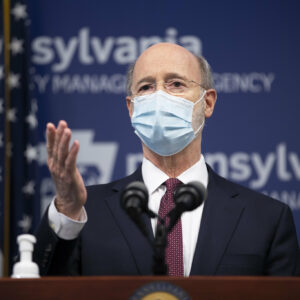 Credit: The Office of Governor Tom Wolf - via Flickr

Update: The governor’s office has contested portions of this report, and we have updated it from its original version. A full reading of their complaints and our responses can be read here.

Gov. Wolf’s office is withholding information on untold hundreds of phone calls, many made at the height of the COVID-19 crisis, in response to a Right to Know Law request from Delaware Valley Journal.

The RTK request asked for phone logs from the commonwealth’s chief executive from February to December for both the office line and the cell phone. This includes the period when Gov. Wolf was under investigation over allegations of selective distribution of waivers to businesses during the coronavirus lockdown.

In response to DVJ’s request, Wolf’s office provided an 8-page document listing 264 conference calls from the governor’s Skype line, but the other normal items generally associated with a call log — inbound calls and outbound calls, the associated phone number called or calling in, the date and time — were withheld.

The dearth of information does little to shine the light on one of the most tumultuous years for the government. Gov. Wolf announced two new states of emergency, one for the COVID-19 crisis and one for civil unrest related to the George Floyd murder in Minneapolis. He used his executive powers to unilaterally extend the deadline for mail-in ballots in the June primary, and made hundreds of critical decisions about closing or opening businesses, allowing indoor or outdoor mass gatherings, vetoed numerous controversial bills, and faced unprecedented pressure from Harrisburg lawmakers.

“The call log [that was provided] by itself does little to shine a light on the governor’s call history and interactions via phone,” said Melissa Melewsky of the Pennsylvania NewsMedia Association. “Knowing the governor spent 20 minutes on a call, without more information, raises more questions than it answers.”

In rebuttal to that idea, the governor’s spokeswoman, Lyndsay Kensinger, pointed to the governor’s online calendars, which oftentimes list the time the call is scheduled and who is included in the calls.

Part of the issue is the Skype phone service the state contracted with at the beginning of 2018.

Delaware Valley Journal previously reported on a similar matter last November, when a request for months-worth of phone logs from the Department of Health’s then-secretary Dr. Rachel Levine only produced 30 days of calls. The department blamed the Skype system for not keeping an electronic record beyond the most recent 30 days.

Kensinger suggested more documents could be on the way.

“This is just the Skype log, not a record that includes cell phone information,” Kensinger told DVJ. “As indicated previously, we are continuing to collect cell phone bills and will be providing further records when they are available.”

Kensinger also defended the Skype system as a means of transparency.

“It is a virtual telephony system that does not connect a single phone number to a single device. As such, the Skype system appears to provide more information about phone calls then (sic) what is the previous system, which did not appear to track calls in any significant manner.

“Of course, this also means that as the governor was more mobile after the closure of state offices, the Skype logs continued to record information about the governor’s business even when he wasn’t in his office,” Kensinger continue. “Such a system seems to be more transparent, rather than less, particularly when one considers that the governor’s schedule is also posted and provides additional details about many of the calls that appear in the log.”

The governor’s response, taken together with the DOH/Levine response from last year, are beginning to raise red flags for transparency advocates.

“The state’s phone service provider should not be allowed to cloak the identities of people and companies conferring with our leaders,” said Susan Schwartz, president of the Pennsylvania Freedom of Information Coalition.

“That information is supposed to be public for a reason – voters have a right to know who has a hand in shaping public policy, and who has our governor’s ear.  Such knowledge helps protect against conflicts of interest and can reveal when some groups are being left out of discussions.  I urge the state to require that actual phone numbers dialed in and dialed out by government employees and officials be tracked and archived by any phone service provider it uses, as part of the provider’s contract. Providing that record should be part of the service.”

Melewsky, however, believes that is inaccurate. She told DVJ that while the phone number of an individual in a one-to-one call might be redacted, the other information surrounding the call ought to be releasable.

Delaware Valley Journal has filed an appeal on this request.

Gov. Wolf faced a host of questions about transparency in 2020.

Early in the pandemic, many teams that respond to RTK requests were not working due to shutdown orders. In response, the General Assembly proposed and passed a bill requiring records requests to still be processed even during a disaster declaration. Even though Wolf expressed his displeasure with the bill, it was passed with a bipartisan veto-proof majority, essentially forcing it on the governor.

“When does a crisis become an excuse?” the editorial board of the Philadelphia Inquirer asked.

“Gov. Tom Wolf announced that he will reluctantly allow a transparency bill that passed unanimously in both chambers of the General Assembly to become law without his signature. The Republican-crafted legislation compels the administration to resume its responses to requests under the state’s Right-to-Know Law — a practice that was suspended in March as the government transitioned to work-from-home.”

At about the same time that year, business interests, as well as the media, were highly critical of the administration’s early refusal to release a list of businesses that were exempt from coronavirus-related shutdown orders.

(Disclosure: the author of this story is an elected director and dues-paying member of the Pennsylvania Freedom of Information Coalition).