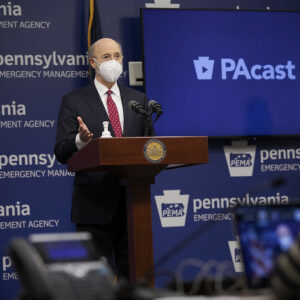 In the interests of transparency, we will publish Kinsinger’s complaints fully, and address each one individually.

What DVJ wrote: In response to DVJ’s request, Wolf’s office provided an 8-page document listing 264 conference calls from the governor’s Skype line, but the other normal items generally associated with a call log — inbound calls and outbound calls, the associated phone number called or calling in, the date and time — were withheld.

Kensinger’s response: “The dates and times of the calls were not withheld and are in fact included on the linked spreadsheet. Other calls, including those made or received on the governor’s personal cell phone, are being retrieved from the service providers and will be provided. Nothing was ‘withheld.’”

DVJ’s reply:  As DVJ reported, the governor’s office responded to a request for his phone logs (which are public record) with what the governor’s attorney claimed was “the Office’s record of calls in which the Governor participated via the Office’s electronic telephony and messaging/conference systems” — in other words, his office phone. Those records did not show a single inbound or outbound call. It is improbable that not a single phone call was made to or from the governor between February and December of 2020. Will more records be forthcoming?

Finally, the request from DVJ was placed with Wolf’s office on Dec. 3, 2020. The governor’s office responded on Jan. 11, and even in those intervening days could not scrape up any cell phone logs. Indeed, the governor’s attorney raised the possibility that they might not even exist.

What DVJ wrote: “’The call log [that was provided] by itself does little to shine a light on the Governor’s call history and interactions via phone,’ said Melissa Melewsky of the Pennsylvania NewsMedia Association. ‘Knowing the Governor spent 20 minutes on a call, without more information, raises more questions than it answers.’”

Kensinger’s response: “As previously noted to you, the governor publicly releases his weekly calendar which often contains “more information” such as participants and subjects of calls. Those calendars dating back to his first week in office are located at https://www.governor.pa.gov/schedule/.”

DVJ’s reply: The governor’s calendar does provide adequate information on some — but not all — of his scheduled calls. We have changed the story to more accurately reflect this somewhat murky situation.

That context was lacking, and we regret the error in not providing it. At the same time, the calendar contains numerous instances of periods blocked off for “call time” on the governor’s calendar that include no names whatsoever. The pages for Feb. 7 and 10 are good examples. We have added a sentence to the story that the calendar frequently does list a call and the participants.

What DVJ wrote: “’The state’s phone service provider should not be allowed to cloak the identities of people and companies conferring with our leaders,’” said Susan Schwartz, president of the Pennsylvania Freedom of Information Coalition.”

Kensinger’s response: “Query what the solution is? Does the PFOIC believe that phone numbers of private citizens (and the governor’s or other officials’ direct or home phone number) should be published?

The following are exempt from access by a requester under this act: a record containing all or part of a person’s Social Security number, driver’s license number, personal financial information, home, cellular or personal telephone numbers, personal e-mail addresses, employee number or other confidential personal identification number. (to 65 P.S. § 67.708(b)(6).”

Furthermore, Kensinger’s response fails to address the fact that many numbers called by or received by an elected official come from business or government lines — in other words, not private individuals.

In other states, public officials have dealt with the issue of privacy by revealing the names and partial phone numbers. For example, in a records request to then-Colorado Governor John Hickenlooper, his office released phone logs that redacted the last six numbers of the ten-digit string, while identifying the person behind each number.

“Melewsky, however, believes that is inaccurate. She told DVJ that while the phone number of an individual in a one-to-one call might be redacted, the other information surrounding the call ought to be releasable.”

Kensinger’s response: “See above – phone numbers are not public.  The ‘other information’ that she seeks was, in fact, provided.”

DVJ’s response: When the Department of Health provided cell phone logs for Dr. Levine to DVJ last year, not a single outbound or inbound number was removed or redacted.

What DVJ wrote: “Early in the pandemic, he closed his own administration’s records-response team. But a bipartisan coalition of lawmakers forced him to open the offices back up.”

Kensinger’s response: “Wrong – RTKL timeframes toll during office closures as set forth in the RTKL itself.  No one ‘forced’ anything.”

DVJ’s response: Gov. Wolf opposed a bill that would require state agencies to respond to open records requests during disaster declarations. The bill was passed with unanimous votes in the Pennsylvania House and Senate, sending a clear message to the governor that his threats of a veto on the bill were useless. He was forced into accepting that legislation.

Our original characterization has been updated to make that clearer.

Final responses from DVJ: Through two requests for phone logs from state officials, it has become clear that the Skype system does not create phone logs in the way the average person understands the concept. Furthermore, the state Department of Health said their system only allowed the retrieval of the most recent 30 days of calls. A robust system would capture all call activity for months or years.

Additionally, it should be noted the RTK request to Wolf sought phone records from the beginning of February to the beginning of December, but the log provided by the governor’s office only shows entries beginning on March 17.

Yet on the governor’s calendar during that time, there are entries such as on Feb 10, marked only as “call time,” with no further information.

Ultimately, Delaware Valley Journal endorses the position of Pennsylvania Freedom of Information Coalition President Susan Schwartz: “I urge the state to require that actual phone numbers dialed in and dialed out by government employees and officials be tracked and archived by any phone service provider it uses, as part of the provider’s contract.”