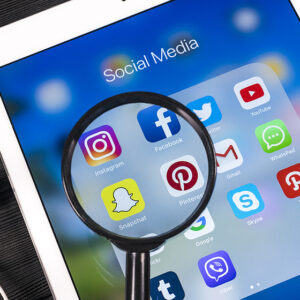 Want To Be A Cop in DelVal? You’ll Get A Facebook ‘Frisk’ First.

Should your social media posts be enough to keep you from serving as a police officer? In the Delaware Valley, it could.

During a recent online roundtable on policing and racial equity, Delaware Valley law enforcement officials acknowledged they monitor social media accounts of current officers and look into the online history of potential hires. Several departments acknowledging contracting with private companies to check the personal social media of these public servants.

“There’s been reports of law enforcement personnel using social media to connect with others who share hateful rhetoric or thoughts, are there any actions being done to address this?” was the question asked during the online discussion, part of a series organized by state Rep. Christina Sappey (D-Chester.)

“We have a vigorous approach to this (social media that is deemed inappropriate for a law enforcement official), with disciplinary actions that include termination,” said Chief Gerald Simpson of the Chester County Regional Police Department.

“But before we even get to that, we have a company that we contract with, that, if you are someone who may be prone towards those types of groups, they will find you (online),” said Simpson. “It’s part of our employment process. This particular company will find you, even going back years, even if you try and sanitize it.”

Chester County Sheriff Fredda Maddox said her department is looking to hire the same firm (which went unnamed) for the same reason.

“And this is tricky, because it’s freedom of speech,” said Sheriff Maddox. “We are exploring working with the same company as Gerry’s department does, for the interview process for applicants. And Gerry’s right, they will find you, even when people go underground, as people do.”

Police departments vetting prospective officers by surfing their Twitter feeds and Instagram accounts isn’t new. Some departments across the country have acknowledged doing so for a decade. The issue has even gone to the Pennsylvania state Supreme Court, which has ordered the Commonwealth Court to take up a lawsuit filed by the ACLU seeking more information about the state police’s social media monitoring policy and how they use that information in the hiring process.

The ACLU’s involvement raises the issue of constitutionally-protected speech. But according to Scott Bohn of the Pennsylvania Chiefs of Police, those rights are more limited when it comes to law enforcement.

“Regardless of the right to free speech, which of course, is limited to a certain extent, for those of us in a public capacity, because we have to operate above that standard as law enforcement officers,” answered Bohn, whose organization represents over 1,100 police departments that employ over 40,000 officers statewide. “But we certainly recognize that this can happen. Certainly, the horrific incidents in January at the Capitol show that.”

“The public has to know we take this seriously. We do,” said Rowe. “We have to crack down and there have to be consequences. You don’t have to be a super progressive reformer, not to criticize progressive reformers in any way, to be offended by certain words, because 98 to 99 percent of the general public are offended by those words.  If there aren’t consequences, then we risk losing the faith of the general public.”

Still, Chief Simpson said, it’s important not to overlook the one part of law enforcement that technology can’t change: The desire to serve the public.

“Let’s keep in mind that the majority of young people coming into this job do it because they love humanity,” said Chester County’s Chief Simpson. “I’m a people person and that’s why I chose this job, going on four decades ago.”