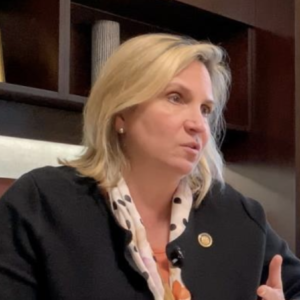 With the start of the trial for the officer accused of killing George Floyd—an incident that sparked riots around the U.S.— state Representative Christina Sappey (D-Chester) held a virtual conversation with Chester County law enforcement leaders about the criminal justice system and “institutional disadvantages.”

Sappey began her “Institutional Disadvantage” talks last June as racial tensions were at a peak. Previous discussions have explored the origins of prejudice, how institutional disadvantages are upheld over time, and how faith can be a way of healing.

“Over the course of the last year, we have spent some time talking about all the ways we have experienced disadvantage in our history,” said Sappey. “In terms of healing and moving forward, we have to have these conversations and all of our stakeholders need to be at the table with us, so no conversation is complete without law enforcement.”

For Chester County Sheriff Fredda Maddox, the issue is personal.

“I’m only the second woman to hold this seat in the county and the first person of color,” said Maddox. “When I started, there weren’t many women in law enforcement, especially state police. I was one of the first in the county.”

One of the first questions was about what can be done to make law enforcement more reflective of various communities. A way to increase minority membership on police forces is to explain the perks of joining, including specific benefits that police officers are given, Maddox said. Outreach to communities of color is also needed to attract diverse candidates to law enforcement, she noted.

Participants acknowledged the need for improvement.

“We’ve done a great job–not well enough, we still have got more work to do–in the last eight months to open it up and bring more people into the conversation and to a seat at the table to help us do better,” said Gerry Simpson, chief of the Southern Chester County Regional Police Department.

“I think there is a lot that can be done,” said Scott Bohn, executive director of the Pennsylvania Chiefs of Police Association. “I know that certainly, it’s a bit polarized… but we’re certainly working to bridge those gaps.”

“We know that across the country and certainly reflected here in the state, approximately 13 percent of police officers are female,” said Bohn. “Obviously, that is not representative of the populace in our state, so we recognize we need to do a better job.”

Questions also arose about inclusion and cultural awareness training currently offered within forces. The Rev. Annalie Korengel, the chaplain for Kennett Township Police, said a class she’s attending on implicit bias in April “filled up quickly and they opened up to a second class, so I was just thrilled to see that class was being offered and so many were taking advantage of it.”

Simpson, meanwhile, encouraged his colleagues to watch A.J. Ali’s “Walking While Black,” Ava DuVernay’s “13th,” and to read “Hate U Give,” by Angie Thomas.

“There’s a perspective gain there that I wouldn’t have otherwise understood without understanding that community’s perspective,” said Simpson.

Another question posed was whether police should respond to every 911 call or if mental health professionals would be more appropriate in some circumstances.

“I think that 99 percent of the time when you call 911, you want the warrior, the highly trained (officer),” said Korengel. “You want that person to show up,” she explained. But there are occasions when someone different may be needed. “They need for a different 911, a mental health 911. I don’t need the cops, I need a social worker.”

“I think if more departments had chaplains, had people with those kinds of backgrounds,” cops could then “focus on what they’re trained and what we want them to do… We cannot expect our officers to respond to all the 911 calls,” Korengel said.

At the conclusion of the meeting, some law enforcement officials reminded participants that they care about those they serve.

“The vast majority of young people coming onto this job love humanity…  Remember we are people too, we are your neighbors,” said Simpson.

“We’re moms, dads, we’re sisters, we’re brothers, we’re your neighbors. And we’re human,” said Maddox. “We want to go home safely, and we want whoever we come in contact with in the public to go home safely, too… (We) protect and serve you out there, our constituents. You are who we are there to serve.”