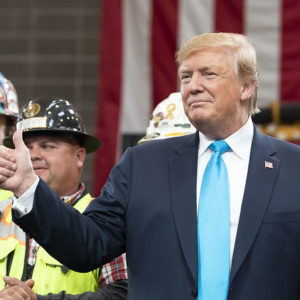 Team Trump tells Delaware Valley Journal that, despite the polls, they believe they have a secret weapon to win Pennsylvania in November:

While the Joe Biden campaign has highlighted its decision to avoid direct voter contact due to COVID-19, Brittney Robinson with the Trump campaign in Pennsylvania brags about their door-to-door campaign in the Keystone State.

“I think that one of the biggest things that we have been able to point to is just showing how expansive our operation is,” Robinson said. “The voter contact numbers — we have over 8 million voters contacted cycle-to-date so far just in the Commonwealth. And particularly our door numbers: we’re over 1.2 million [door knocks], and I think that’s just a very huge contrast, especially to the Biden camp not out knocking on doors, whereas we’ve been doing it since last year.”

And, Robinson told DVJournal, one million of those door knocks came after the stay-at-home orders put in place by Gov. Wolf were being lifted county-by-county  in June.

Nationwide the Trump campaign says, it knocked on one million doors in one week and 14 million doors since June, many in swing states like Pennsylvania. It’s a gap that has spooked some down-ballot Democrats worried that Biden’s decision to keep his campaign at home could hurt their cause.

The Trump campaign’s decision to continue with the strategy even amidst the pandemic got a thorough going-over from the MSNBC crew from “Morning Joe,” thanks to video from Michigan.

“It’s clear that the Biden campaign thinks that they are living their values by doing this this way [not knocking on doors], but there’s a real question as to whether that’s actually going to work,” said NBC political reporter Kasie Hunt.

“Well, you look at the Trump canvassers that went up [to a door in the video], what were they doing?” host Joe Scarborough asked.

“They were wearing masks, they knocked on the door, and then they stepped back 6 feet. So, I don’t think there’s a doctor in America that would say, ‘If they do this and step back 6 feet and come off of that door ledge,’ that they are endangering anybody.”

Some Democrats are definitely worried.

“But with anxiety growing in the final sprint before Election Day, an increasing number of Democrats up and down the ballot are making the call to stop ceding voters’ doors to the GOP — a decision that could increase pressure on Biden’s campaign to restart the traditional election-year practice,” Politico reported two weeks ago.

“Democratic candidates who have returned to canvassing said they are adhering to strict safety protocols, as well as asking voters if they are comfortable with their presence.”

Just as the pandemic began to hit Pennsylvania in March, the Trump campaign was boasting that it converted into an all-digital effort in under 48 hours.

Among the half-dozen swing states this year, Pennsylvania has remained one of the closer states between the two candidates.

And a new Delaware Valley Journal poll taken around the same time found Biden enjoyed a mammoth 25 point lead in the four-county area, 60 to 35 percent.