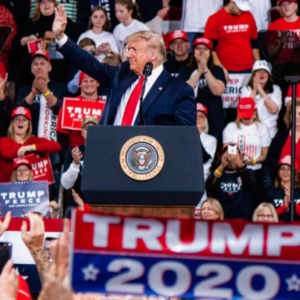 The Coronavirus pandemic has changed how Americans do everything from buy groceries to educate kids — and politics is no exception. Social distancing has changed how President Trump is campaigning in Pennsylvania but, in the opinion of his campaign team, it’s still on track for another win in the commonwealth.

In the opinion of many pundits, Pennsylvania is key to Trump’s re-election. It’s a state Trump won in 2016 by just 44,000 votes and a prime target of his presumptive Democratic opponent, former Vice President Joe Biden.

However, none of that polling data was gathered after Biden — long considered a “native son” of Philadelphia and the Keystone State — made a “no new fracking” pledge during a televised debate against Vermont Sen. Bernie Sanders. In addition, as the coronavirus pandemic continues, Trump’s approval numbers have risen.

Campaigns all across Pennsylvania are adapting to the new coronavirus realities — whether that requires a shift to digital outreach or a fallback on reliable methods like phone banks and direct mail — all coming while fundraising is expected to dry up, as the economy has already begun a severe contraction not seen since 2008.

National figures the campaign released claimed that for a nationwide week of training, “we made more phone calls this past week, 1,782,776, than we had in all of 2018 at this point.”

“There wasn’t a heavy lift on our part on March 12 when we made the switch over to 100 percent digital,” Joyce said. “We did that without drop off, too. Drop off being we’re making less calls, we’re making less voter contacts, or volunteers are dropping off. None of that happened.”

“When you’re contacting a voter, when you’re building out your teams, anything that we’re doing is done from home.” The most popular and most successful of those activities, Joyce said, are the larger video chat rooms which still allow for face-to-face communication, just digitally.

RNC spokeswoman Nina McLaughlin said the campaign is confident the calls are working thanks to a software app that walks the campaign caller through every step, a process that begins by discussing coronavirus concerns.

“When we call voters, the first thing we do is check in,” McLaughlin told InsideSources. “We ask them, ‘How are you doing? Is everything OK?’ We talk to them about [coronavirus] resources at their disposal,” close to where the call recipient lives.

The Trump Victory one-page document reviewed by Delaware Valley Journal contains at least a dozen different data points but goes for the political jugular at the end, saying “Democrats Cannot Replicate These Efforts,” saying the party has been too busy “fighting to out-socialize each other[.]”

McLaughlin believes the president’s campaign has a distinct digital advantage.

“Joe Biden spent four days in his basement figuring out how to set up a Facebook Live stream. In 24 hours, we transitioned entirely to virtual training from home,” McLaughlin said. “It’s been a huge success thus far.”