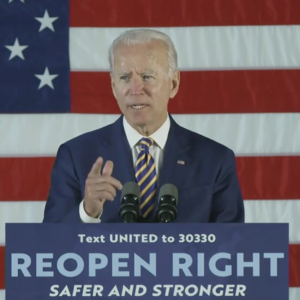 On the eve of the first presidential debate of the 2020 general election, a new Delaware Valley Journal poll gives Joe Biden a 25-point lead over Donald Trump among the suburban voters of the Delaware Valley.

Registered voters in the four-county region back Biden 60 to 35 percent, far outpacing Hillary Clinton’s 2016 margin of 55-41 percent margin in the Delaware Valley four years ago, when Trump won the state by just 44,000 votes. However, the poll also found evidence of a potential “shy Trump” vote that could impact November’s election.

The survey of nearly 700 registered voters in the suburban areas of Philadelphia was conducted by Praecones Analytica between September 23-25. The poll was taken after the seismic political news that President Trump and the GOP plan to fill the seat left vacant by the passing of  Supreme Court Justice Ruth Bader Ginsburg before the election.

The poll, however, showed a significant number are unfazed by the Supreme Court brawl, or if a voter was affected by it, they were more likely to vote Democrat.

If there is a silver lining in the DVJ poll for the president, it’s that 47 percent of respondents said they knew a friend, neighbor, or coworker who they believe secretly intends to vote for Trump.

“There’s a common belief that many Trump voters are keeping their support for the President secret,” says Jonathan Klingler of Praecones Analytica. “If half of voters know a closeted Trump supporter, this could indicate either a small group of well-connected shy Trump supporters, or a larger silent majority. Past investigations have found little evidence that Trump voters conceal their support from human pollsters. Still, if there were a substantial number of Trump supporters ignored by polls, it could turn a close election in favor of the president.”

Overall, however, the poll findings favor Joe Biden. For example, by a nearly two-to-one margin, Delaware Valley voters see November as a change election (61 percent) as opposed to 33 percent who want to stay the course.

As for Trump’s recent emphasis on a law-and-order message, 60 percent of respondents say re-electing him will lead to more unrest and violence. Just 28 percent say the same about electing Biden.

Of the 44 Pennsylvania polls tallied by RealClearPolitics in its average since March, Biden has led in all of them except for two ties, and a single CNBC poll from late May that showed Trump with a 4-point lead.

Democrats have been on a steady march in the Delaware Valley, as seen by the party taking majorities on all of the county boards — majorities that had been in Republican hands sometimes dating back more than a century.

Earlier this year, Chester County Democrats celebrated a milestone when they overtook Republicans in voter registrations in that county.

But while Democrats are celebrating in southeast Pennsylvania, Republicans have been gaining more voters statewide, adding “almost 198,000 registered voters to the books compared to this time four years ago,” according to Politico.

The DVJ poll also mirrors other national trends that could shape the outcome, namely that third-party candidates appear to be gathering far less support than in 2016, and the number of undecideds is already very low with four weeks still to go.

Those last two factors will make it especially difficult for Trump to improve his chances with only 36 days left until Election Day. The real question is whether the incumbent president can boost his numbers high enough in the rest of the state to overcome what’s shaping up to be a shellacking in the Delaware Valley.