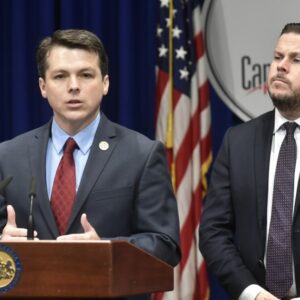 This article originally appeared in Broad and Liberty

Brendan and Kevin Boyle, two Irish Catholic brothers from Northeast Philadelphia, have been attempting to take the Democratic party establishment by storm since they won their races for the U.S. House and the Pennsylvania House in 2008 and 2010, respectively. One could even argue that they were among the first in what became the Democratic Party’s forthright attempt to woo white, blue-collar Pennsylvanians without college degrees back into the fold.

In 2017, Philadelphia Magazine said in a feature article, “For years, the Boyle brothers have won over white working-class swing voters — many of whom cast ballots for President Donald Trump — with a Franklin D. Roosevelt brand of fiscal liberalism.”

But since then, the Boyle brothers have been overshadowed by more high-profile attempts by the Democratic Party to present a blue-collar image to Pennsylvanians–notably, President Joe Biden during his 2020 campaign, Rep. Connor Lamb (Pa.-17), and Lt. Gov. John Fetterman who is now running for the U.S. Senate.

And now, recent court and campaign finance documents show that the two brothers are increasingly enveloped in vague legal battles paid for, either directly or indirectly, by Brendan Boyle’s campaign funds, and both are relying on the same criminal defense attorney.

Since the fall, Rep. Brendan Boyle (Pa.–02) has paid $30,000 from his campaign account to a Philadelphia criminal defense attorney, R. Emmett Madden.

Boyle’s campaign first made a $10,000 payment to Madden in October. And first quarter campaign finance filings show two new payments of $10,000 to Madden, one on Jan. 8, 2021 for “legal services” and another on March 8 for “consulting.”

Payments to Madden’s firm from campaign coffers would have come directly from financial contributors to Boyle’s campaign committee.

The payments to Madden are also notable because Madden’s expertise is highly focused on “personal injury and criminal defense,” according to his website. But recent litigation shows that he has also involved himself in election law issues, including successful efforts to eliminate nomination petitions for three candidates seeking local offices in Montgomery County. Saleema Lovelace, Martin Eckert, and Teresa Parris were all disqualified from the May primary ballot for municipal offices after Madden brought a complaint in Montgomery County.

There is no evidence showing that Madden’s work to disqualify those three candidates was either paid for or directed by Brendan Boyle.

When asked about the original payments to Madden last year, though, Boyle and his campaign were tight-lipped.

“As for this specific recent expense, Mr. Madden is currently providing legal representation to Congressman Boyle on a matter that involves his campaign. It is not a criminal matter. As it involves active litigation, it would be inappropriate to offer further comment,” Heppard concluded.

Heppard is also the chief of staff in Boyle’s congressional office.

Boyle and his campaign committee are still refusing to name or cite the active lawsuit that would necessitate the payments. New requests for comment from Broad + Liberty to the Boyle campaign were not returned, and relevant cases were not found via searches in both local and federal jurisdictions.

The suit alleges that the younger Boyle attempted to malign Sabatina’s reputation and scuttle his political career by spreading rumors of sexual impropriety.

“The woman isn’t named in the lawsuit, and Sabatina hasn’t been charged with any sexual-assault allegations,” the Inquirer reported when the suit was filed in 2018.

Court documents from Sabatina and his legal team include text messages sent by Rep. Kevin Boyle which they say proves their case of defamation.

Kevin had run to unseat Sabatina in 2016 in a campaign that surely engendered hard feelings.

Like his older brother, Kevin’s defense is being paid for out of his campaign fund. Notably, a sizable portion of the funds in Kevin’s campaign account are transfers from the federal campaign accounts or political action committees controlled by his brother, Brendan.

Paying legal fees from a campaign account is legal, provided the matter is closely related enough to the politician.