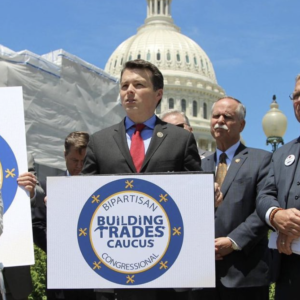 Who is suing Democratic Congressman Brendan Boyle, and why? The congressman won’t say, but he’s spending thousands of dollars in campaign donations on a high-powered Philly defense attorney to fight it.

The lawyer, R. Emmett Madden, primarily advertises himself as a defense attorney. He’s already representing Brendan’s brother, state Rep. Kevin Boyle, in a defamation suit in which a state senator and rival, John Sabatina Jr., has accused Kevin of falsely telling others Sabatina had committed a sex crime against a woman more than a decade ago.

Post-election campaign finance reports show Rep. Brendan Boyle cut a $10,000 check to Madden this October.  Madden bills himself on his website as “an experienced personal injury and criminal defense attorney.”

Delaware Valley Journal inquired about the payment, and specifically asked if the money was related to Kevin’s defamation suit, even though Brendan is not a party to the case.

“As for this specific recent expense, Mr. Madden is currently providing legal representation to Congressman Boyle on a matter that involves his campaign. It is not a criminal matter. As it involves active litigation, it would be inappropriate to offer further comment.”

DVJ asked the campaign to identify — without having to comment upon — the “active litigation” by case number or to provide a document from case filings. They declined to respond.

When reached by phone, Madden only said, “I can’t answer any of your questions, sir,” and hung up.

The latest developments underscore the depth to which the two brothers, both Philadelphia Democrats, are intertwined with one another, politically, legally and financially through campaign funding.

In November, DVJ reported that Kevin Boyle’s state campaign had raised about $200,000 in the current cycle, and slightly more than half of that has been spent on attorney’s fees related to the defamation suit. Furthermore, $75,000 of the total raised came from campaign committees or PACs run by Brendan, meaning Brendan was using federal fundraising largely to underwrite his brother’s defense in the matter.

State fillings show Kevin Boyle first paid Madden this February, also for $10,000, which Boyle confirmed to DVJ was all intended for the defamation suit.

“FYI let me be clear no campaign expenses of mine are in relation to any criminal investigation,” Kevin Boyle said last month.

The Philadelphia courts database lists a settlement conference slated for February, and if that fails, has a projected trial date of the first week of May.

When DVJ first broke the news of the extent to which Kevin had accepted campaign transfers from his brother, Kevin pointed to other cycles, saying: “Overall I raised nearly $1 million in the [2015/2016] cycle.”

Reacting to those numbers, longtime Pennsylvania Republican analyst Charlie Gerow dryly quipped that the world has more proof now that Philadelphia is the city of brotherly love.

As for the “active litigation” Brendan Boyle is fighting against, DVJ could not locate a case against him or “Citizens for Boyle” in Pennsylvania’s eastern district federal court, in D.C. federal court or in the Philadelphia Court of Common Pleas.

Even though Kevin is the only Boyle accused in the defamation suit from Sabatina Jr., the overall arc of the drama involves his brother’s ambitions as well.

“The rivalry [between Kevin Boyle and Sabatina Jr.,] stems from a successful effort by Boyle and his older brother, Brendan, now a U.S. House member, to build their own political brand without the party’s blessing,” the Philadelphia Inquirer reported in late 2018. “Though the Boyles have risen to prominence, Kevin Boyle suffered a setback in 2016 when he lost to Sabatina in the Democratic primary for state Senate.”

Court filings indicate Sabatina claims Kevin Boyle defamed him by “recklessly and knowingly perpetuating a false and malicious lie” when texting with a friend and saying that Sabatina had raped a woman he knew in 2006.

No victim is named in any of the legal filings, and Sabatina has never been charged with any crime.