Rising crime rates, led by spikes in violent crime, have been ravaging Pennsylvania’s major cities and are now spilling over into suburban and rural communities.

As we have continued to witness tragic news story after tragic news story of young lives ended too soon or businesses being forced to close or relocate due to preventable incidents of crime, the members of the House Republican Caucus have been working to respond with smart legislation designed to marshal state and local resources to keep Pennsylvanians safe and ensure criminals are off our streets.

Our efforts began in earnest at the beginning of the year with a package of “smart justice” bills that were aimed at providing state and local officials with more tools to combat increasing gun violence while also giving crime victims greater ability to exercise the rights afforded to them.

That first bill, House Bill 2275, would supercharge the Attorney General’s Gun Violence Task Force to help crack down on illegal gun crimes in Philadelphia, a place where shooting incidents and victims of gun crime have continued to increase over last year’s historic numbers. That legislation passed the House in April of this year.

Along those same lines, House Bill 2464, which was signed into law as Act 77 of 2022 in July, established standing for victims of crime to seek enforcement of the rights that have already been afforded to them in law. This law stops crime victims from being reliant on third parties to stand up for their protection and allows them to know the protections afforded to them by current law will be enforced.

As part of a truly historic budget passed in the beginning of July, House Republicans ensured providing tools to state and local law enforcement to keep Pennsylvanians safe was at the forefront of our discussions.

That budget secured $7.6 million for a joint local-state task force to focus on prosecuting illegal gun crimes and straw purchases of firearms in Philadelphia.

We also put an incredible amount of resources into getting at the root causes of crime and violence by allocating $135 million in federal relief funding for a collaborative care mental health initiative and efforts to keep our schools safe by including $100 million for school safety and security.

Contemporaneously with the passage of the budget earlier this summer, the House also took the historic step of forming the House Select Committee on Restoring Law and Order, which is a bipartisan committee designed to take a comprehensive look at the historic crime and violence in Philadelphia and help determine what solutions are available to ensure our laws are enforced and Pennsylvanians are kept safe.

As we reach the final days of our 2021-22 legislative session, we are continuing to run through the finish line on stopping crime and violence and working to keep Pennsylvanians safe.

Just this past week, the General Assembly concluded work on legislation sponsored by Rep. Aaron Bernstine (R-Lawrence) on a bill called “Markie’s Law.” This bill, named after Mark “Markie” Mason—an 8-year-old who was stabbed to death by a man paroled before the end of his sentence for violent crime—will postpone consideration of a violent inmate’s parole for two years following their minimum release date.

This legislation, awaiting Gov. Wolf’s signature, will keep children and other Pennsylvanians safe from criminals convicted of violent crimes by ensuring they stay where they belong: behind bars.

While crime and violence continue to persist, reversing the trend of out-of-control crime by providing state resources, passing tough-on-crime legislation, and using legislative authority to hold local officials accountable has been a priority of House Republicans over the last two years.

As we reach our remaining session days, we will continue to rise to the occasion to do what we can to keep Pennsylvanians safe and protect victims of crime. 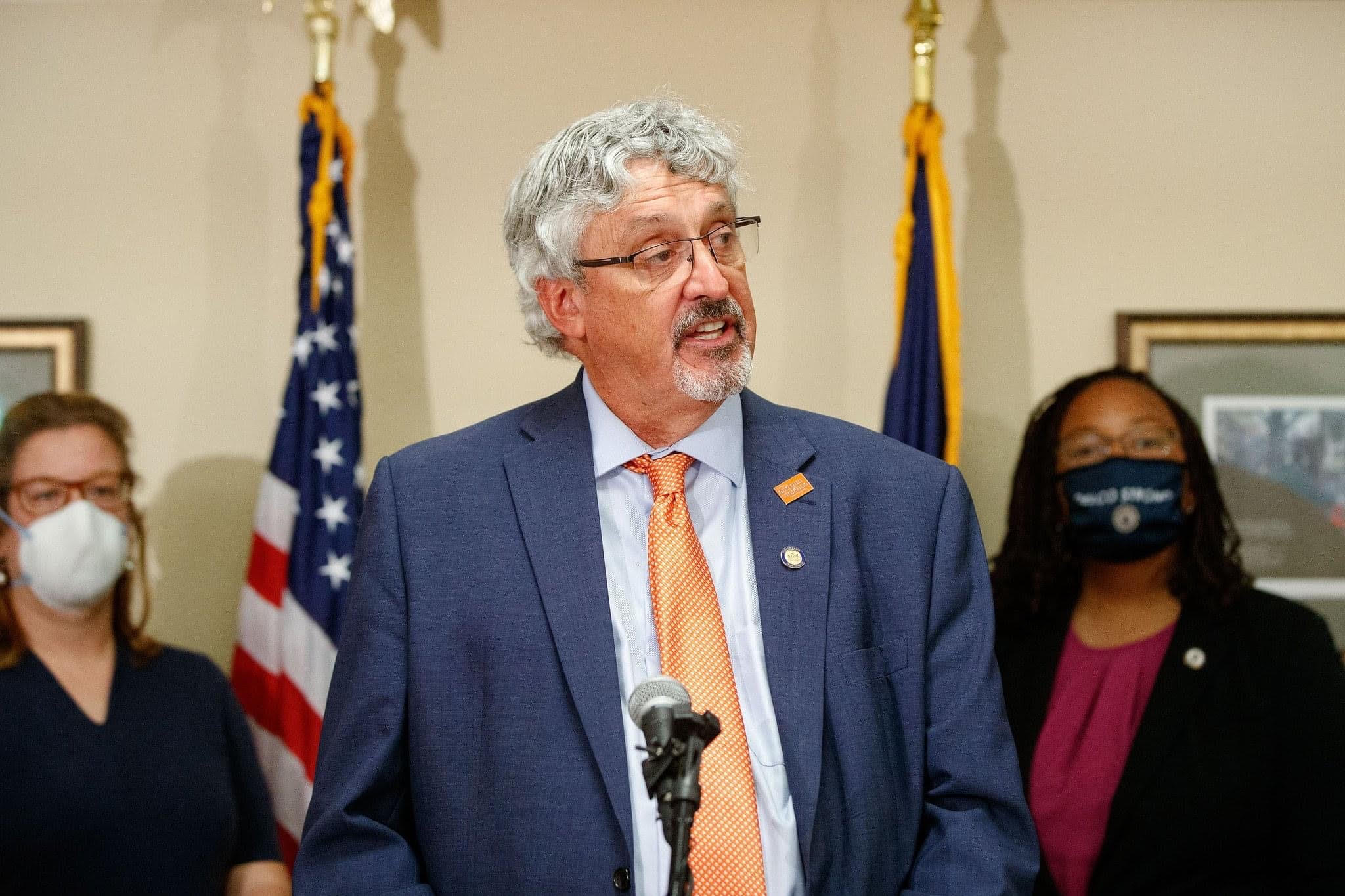 State legislators and county officials have gone from picketing and protesting outside Crozer-Chester Medical Center to proposing legislation.

The package of bills was created in response to decisions made by Prospect Medical Holdings – the parent company of Crozer Health- to close numerous departments, cut healthcare staff, and discontinue services within several Delaware County hospitals. These lawmakers believe local patients aren’t being properly served and communities are suffering.

A spokesperson for Prospect Medical did not respond to requests for comment.

“What’s happening with Crozer Health is a tragedy and underscores the need for legislators to work to protect our local healthcare systems from manipulative and predatory private-equity practices in the future,” said Kearney. “We want to give the state more oversight over these transactions and create other policies that deter these bad actors from looting our healthcare systems and then running once the resources vanish. If private equity in healthcare prioritizes investors and protects their assets, then this legislative delegation will work equally as hard to protect our constituents, and the integrity of our healthcare systems.”

Prospect Medical Holdings and its former majority owner Leonard Green & Partners have a history of cutting healthcare systems to maximize profits for executives and investors. While disregarding the well-being and ongoing quality care of patients, Kearney said in a press release. Crozer’s financial collapse could have been avoided had there been state protections against irresponsible debt recapitalizations and other financial actions taken by the system’s owners, he said

“Each time they strike these kinds of deals and real estate splits, they know the end of their scheme will leave communities without access to quality healthcare,” Williams said. “We saw this happen with Hahnemann and now we’re seeing it happen with Crozer, by a company that has a history of these despicable actions. At this point, it’s clear Leonard Green & Partners is operating from a playbook that puts profit over people. This legislation will put a stop to that and let any private equity company know people over profit is the only option in Pennsylvania.”

Kane said, “As a former labor union leader, I know how important it is to keep these essential jobs secure and without the worry of being fired due to corporate greed. As a cancer survivor, I have experienced firsthand what a high-functioning hospital does to ensure the health and protection of a community. There’s no place for private-equity firms in Pennsylvania and we’re going to make it very painful for them to just bleed us dry and walk away.”

Six Senate bills are included in the package:

“A healthcare system that prioritizes patients over the interests of private equity firms is the foundation for a healthy community,” said Cappelletti, who is also a sponsor of the bill package. “Senate Bill 1275 would protect our communities from private equity firms making acquisitions only to extract the resources from the acquired companies and subsequently walk away from the community altogether.”

Each Senate Bill will have a companion bill in the state House.

Zabel added, “There is nothing preventing what’s happening with Prospect Medical Holdings from happening again. Let’s not forget that these closures or fire sales not only affect the community at large, but they are also regional employers that impact our economy and the lives of hundreds and thousands of employees. There’s much that’s gone wrong with Crozer; let’s not waste this opportunity to learn from the mistakes and then affect the law in Pennsylvania going forward.”

“Access to life-saving, professional medical care should not be consumed by corporate greed and get-rich-quick schemes. My colleagues and I will do everything we can to prevent community hospitals from being exploited by for-profit systems,” said O’Mara.

“In Delaware County, we have seen firsthand what it looks like when a for-profit hospital system puts profits over people,” said Krueger. “This is why I have introduced legislation that would stop investors from acquiring hospitals just to pay themselves massive dividends.”

“There is obviously a lot to divide one’s attention to in Harrisburg right now given our budget negotiations and deadline,” said Aigner Cleveland, Kearney’s spokesperson. “We have worked well with Republicans on healthcare reform issues before.

“Rural nursing homes and hospitals are in danger and have also fallen prey to bad private equity deals, so we know it’s an issue for our Republican legislators, as well. We expect some of these to be referred to Health and Human Services and some of these to go to finance, or banking and insurance perhaps.”

For years, there have been calls from both inside and outside the Capitol from people asking that more be done to curb the influence of lobbyists and political consultants in Harrisburg. Government, which is supposed to serve the will of the people, can unfortunately be swayed by outside sources.

Pennsylvanians deserve to have faith in their government. They deserve to trust that government officials are acting in their best interests, rather than on behalf of others whose influence is shrouded.

That is why some of my colleagues and I came together to rise to the challenge that Sen. Jake Corman laid out in his first speech as Senate Pro Tempore in January.

Sen. Kristin Phillips-Hill of York County, Sen. Lisa Baker of Luzerne County, Sen. Tommy Tomlinson of Bucks County and I introduced a package of bills that would subject lobbyists and political consultants to new transparency and ethical standards that limit their level of influence in state government.

My legislation, Senate Bill 801, would require lobbyists to register any clients seeking state financial assistance or grants. It would also prohibit kickbacks and inducements for referrals or performance bonuses for a successful application for taxpayer-funded grants.

Senate Bill 802, sponsored by Sen. Phillips-Hill, would prohibit any state entity from hiring an outside lobbyist or political consultant to lobby any branch of government. The bill would also prohibit former lobbyists who become employees of the General Assembly from being lobbied by their previous colleagues for one year after separation from employment. This would prevent the revolving door of individuals leaving a lobbying firm to join the legislature and immediately being influenced by their former coworkers.

Senate Bill 803, sponsored by Sen. Baker, would prevent lobbyists from also being registered as political consultants and would prohibit a political consultant from lobbying a state official who was a client for the remainder of the term for which consulting services were provided.

Senate Bill 804, sponsored by Sen. Tomlinson, would require all registered lobbyists to complete mandatory annual ethics training developed by the Department of State.

Legislation passed earlier this summer, Act 70 of 2021, requires lobbyists to disclose any equity they hold in any entity for which they are lobbying. While passage of this bill was a good start to stifle the influence of lobbyists and political consultants in Harrisburg, more work remains to make our government serve its people in more transparent and effective ways.

We will continue to work legislatively to bring openness, transparency and improved ethical standards to the Commonwealth’s lobbying industry so public trust in state government can be restored.