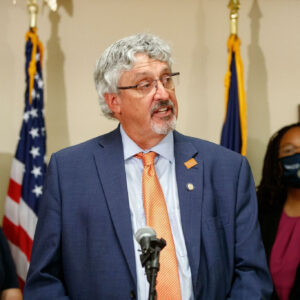 State legislators and county officials have gone from picketing and protesting outside Crozer-Chester Medical Center to proposing legislation.

The package of bills was created in response to decisions made by Prospect Medical Holdings – the parent company of Crozer Health- to close numerous departments, cut healthcare staff, and discontinue services within several Delaware County hospitals. These lawmakers believe local patients aren’t being properly served and communities are suffering.

A spokesperson for Prospect Medical did not respond to requests for comment.

“What’s happening with Crozer Health is a tragedy and underscores the need for legislators to work to protect our local healthcare systems from manipulative and predatory private-equity practices in the future,” said Kearney. “We want to give the state more oversight over these transactions and create other policies that deter these bad actors from looting our healthcare systems and then running once the resources vanish. If private equity in healthcare prioritizes investors and protects their assets, then this legislative delegation will work equally as hard to protect our constituents, and the integrity of our healthcare systems.”

Prospect Medical Holdings and its former majority owner Leonard Green & Partners have a history of cutting healthcare systems to maximize profits for executives and investors. While disregarding the well-being and ongoing quality care of patients, Kearney said in a press release. Crozer’s financial collapse could have been avoided had there been state protections against irresponsible debt recapitalizations and other financial actions taken by the system’s owners, he said

“Each time they strike these kinds of deals and real estate splits, they know the end of their scheme will leave communities without access to quality healthcare,” Williams said. “We saw this happen with Hahnemann and now we’re seeing it happen with Crozer, by a company that has a history of these despicable actions. At this point, it’s clear Leonard Green & Partners is operating from a playbook that puts profit over people. This legislation will put a stop to that and let any private equity company know people over profit is the only option in Pennsylvania.”

Kane said, “As a former labor union leader, I know how important it is to keep these essential jobs secure and without the worry of being fired due to corporate greed. As a cancer survivor, I have experienced firsthand what a high-functioning hospital does to ensure the health and protection of a community. There’s no place for private-equity firms in Pennsylvania and we’re going to make it very painful for them to just bleed us dry and walk away.”

Six Senate bills are included in the package:

“A healthcare system that prioritizes patients over the interests of private equity firms is the foundation for a healthy community,” said Cappelletti, who is also a sponsor of the bill package. “Senate Bill 1275 would protect our communities from private equity firms making acquisitions only to extract the resources from the acquired companies and subsequently walk away from the community altogether.”

Each Senate Bill will have a companion bill in the state House.

Zabel added, “There is nothing preventing what’s happening with Prospect Medical Holdings from happening again. Let’s not forget that these closures or fire sales not only affect the community at large, but they are also regional employers that impact our economy and the lives of hundreds and thousands of employees. There’s much that’s gone wrong with Crozer; let’s not waste this opportunity to learn from the mistakes and then affect the law in Pennsylvania going forward.”

“Access to life-saving, professional medical care should not be consumed by corporate greed and get-rich-quick schemes. My colleagues and I will do everything we can to prevent community hospitals from being exploited by for-profit systems,” said O’Mara.

“In Delaware County, we have seen firsthand what it looks like when a for-profit hospital system puts profits over people,” said Krueger. “This is why I have introduced legislation that would stop investors from acquiring hospitals just to pay themselves massive dividends.”

“There is obviously a lot to divide one’s attention to in Harrisburg right now given our budget negotiations and deadline,” said Aigner Cleveland, Kearney’s spokesperson. “We have worked well with Republicans on healthcare reform issues before.

“Rural nursing homes and hospitals are in danger and have also fallen prey to bad private equity deals, so we know it’s an issue for our Republican legislators, as well. We expect some of these to be referred to Health and Human Services and some of these to go to finance, or banking and insurance perhaps.”