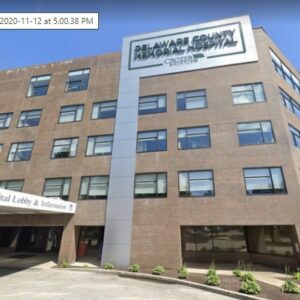 Healthcare workers and lawmakers picketed last week outside of Crozier-Chester Medical Center in Upland over the anticipated closure of numerous hospital wards and the choking off of essential services at Delaware County’s four hospitals.

The steady shuttering of services is expected to impact thousands of residents seeking treatment for issues ranging from addiction to mental health.

“I’m pissed,” Zabel said at the rally, which was organized by the Pennsylvania Association of Staff Nurses and Allied Professionals, which represents nurses and healthcare professionals who work for Crozier Health. “It’s time to call it what it is: Prospect is a deeply immoral evil company. And it’s time to stop tiptoeing around it or saying, ‘Oh, maybe we can negotiate with them.’ No, these are bad, bad, bad people.”

The company says the cuts are necessary due to the financial impact of the COVID-19 pandemic.

Crozier is expected to shutter an outpatient substance abuse clinic at Delaware County Memorial hospital next month, along with a “First Steps” inpatient unit at Crozier-Chester Medical Center Center, where services have been suspended since the start of the year. A crisis center is also expected to close on June 19, as well as many other units that were already or are expected to shutter across the region.

The tab was reportedly $338,000 a year for Aston and Brookhaven and $336,000 for Gleholden, Prospect Park, Tinicum, Norwood, and Ridley Park.

Delaware Valley Journal reached out to each of the municipalities to see if they arranged to pay the bills, but none responded to requests for comment.

Republican congressional candidate David Galluch told DVJ Friday that county officials had few updates for the public at Delco’s State of the County event this week. They continue meeting with Crozier officials in search of a resolution.

The Delco Daily Times reported the sale is expected to close by the end of the year, but Galluch said there was no guarantee that anything will get better in the immediate future.

Galluch called for more oversight of how healthcare giants like parent company Prospect use federal funds. Crozier Health received more than $72 million in relief funds during the pandemic, including about $22 million for Delaware County Memorial Hospital in Drexel Hill, the Daily Times reported.

The hospital said only the funds covered “operational costs.”

Representatives for Crozier did not respond to requests for comment about the crisis or to a request to make CEO Spiegel available for an interview.

In an interview with WHYY, Spiegel was sharply critical of Delaware County officials’ passing an emergency ordinance weeks ago requiring Crozier to give the county 180 days’ notice of any decision to close hospitals or “significant impact units,” such as emergency departments and ambulances services.

The measure also provided for 45 days’ notice of hospitals and long-term care facilities intending to sell or transfer ownership interests.

“We are in an emergency response situation. The consistent reduction of services and programs over the past few months from the largest hospital system in the County has left our community with a void of resources,” Delaware County Council Chair Dr. Monica Taylor said in a statement.

Officials said the Delaware County Department of Human Services was working with new providers to offset gaps in mental and behavioral health services and drug and alcohol addiction treatment. It has also partnered with state and federal lawmakers to find alternative funding solutions.

U.S Rep. Mary Gay Scanlon (D-Delaware/Philadelphia) said in a statement Crozier could not excuse its struggles as almost every hospital was impacted by the pandemic. She called it “unconscionable” and a telltale sign of “corporate greed in the healthcare industry.”

“Only one in our area has so miserably shortchanged patients and staff while looting the system to profit its owners,” Scanlon said. “Health care is a human right and should be treated as such — not as an opportunity to make a profit.”