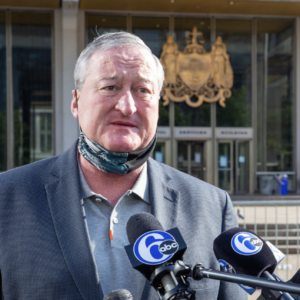 Philadelphia Mayor Jim Kenney apologized for getting tableside dining service in Maryland while his own city is still under his orders to prohibit in-restaurant service. But a handful of waiters and waitresses who spoke to Delaware Valley Journal said they are still feeling some resentment.

“If it wasn’t for the pandemic money, under the unemployment, I wouldn’t have been able to pay my bills,” she told Delaware Valley Journal.

Dine-in service is not allowed in the city but is set to begin a slow reopen next Tuesday when restaurants will be allowed to use 25 percent of their seating capacity.

The debacle for Kenney began on Monday when restaurateur Marc Vetri posted a photo to his Instagram account showing the mayor — with no mask — getting dine-in service at a Maryland restaurant. 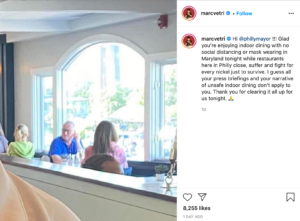 “Hi @phillymayor !!! Glad you’re enjoying indoor dining with no social distancing or mask wearing in Maryland tonight while restaurants here in Philly close, suffer and fight for every nickel just to survive,” Vetri said in the post. “I guess all your press briefings and your narrative of unsafe indoor dining don’t apply to you. Thank you for clearing it all up for us tonight.”

“Yeah, I was upset,” Maurine at South Street Diner said. “I’m still making money off take-out orders and he’s sitting down eating in Maryland,” she added, telling Delaware Valley Journal that she estimates her income has been down 75 percent in the pandemic months.

“My husband works for the state, and thank God, we have four children, he’s an essential employee, so thank God. We just bought a brand-new house right before this happened,” she added.

“We’re working on tips and it’s down because there’s no dine-in.” Max said, estimating his income was only down 30 percent because of the pandemic shutdowns.

“Restaurant owners are among the hardest hit by the pandemic,” Kenney said in his apology posted to Twitter. “I’m sorry if my decision hurt those who’ve worked to keep their businesses going under difficult circumstances. Looking forward to reopening indoor dining soon and visiting my favorite spots.”

Even when restaurants in the city are allowed to resume a portion of dining in, one industry expert says the allowable number of customers won’t be enough to prevent more restaurants from closing completely.

John Longstreet, president and CEO of the Pennsylvania Restaurant and Lodging Association said Governor Wolf’s office asked him about workable dining-in percentages earlier in the summer.

“We talked about [capacity percentages] and they asked about 25 percent, and my comment — I remember it like it was yesterday — I said 25 percent will not work,” Longstreet told the Delaware Valley Journal podcast. In the states that have opened at 25 percent, 70 percent of the restaurants did not open at all. They knew it was unsustainable.”

Under Wolf’s original plan, restaurants in counties that progressed from the “red” to the “yellow” phase were able to host patrons at a 50 percent capacity.

Then in the middle of July, Wolf suddenly revised that figure downwards to 25 percent, throwing the industry into yet another tailspin and earning more backlash.

Wolf was also burned earlier in the year when a Bar-B-Que restaurant in Ohio — just a five-minute drive from the Pennsylvania border — named him employee of the month for causing so many Keystone-staters to drive to his restaurant.

“We’ve broken all kinds of sales records, and we know that a big chunk of it is that Pennsylvania is shut down,” Mike Morgan of Breakwall BBQ in Conneaut, Ohio said back in June.