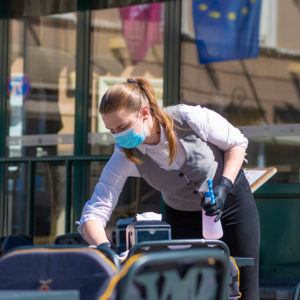 As Governor Wolf places new restrictions on bars and restaurants in an effort to contain any rise in coronavirus cases in Pennsylvania, restaurant owners are staring down a gloomy path for their futures.

The new regulations rollback the procedures put in place when Delaware Valley counties moved into the “yellow” and then “green” reopening phases. Indoor dining capacities are once again significantly limited, and bars can only serve alcohol with meals. No more stopping by your favorite pub for a drink.

Tom Darlington, owner of The Great American Pub in Narberth, said when the new restrictions came out he was “discouraged, frustrated, and angry.” With his restaurant under restrictions since March 15, the latest round make him feel like there’s “no end in sight.”

Carlos Melendez, owner of Coyote Crossing in Conshohocken, said he believed the order was “irresponsible,” while Darlington saw a “noticeable drop” in last week’s sales. “It’s killing us,” Darlington concluded.

The new restrictions limit indoor dining to just 25 percent of capacity in restaurants. For Darlington, it means he can have only six people inside his restaurant, including staff, leading to some unexpected consequences.

“We’re in the middle of a heatwave,” said Darlington when describing how the loss of indoor dining capacity has hurt his business. “It’s a 95-degree heat streak… no one is eating in the sun, even in the shade.” Darlington added he’s not getting customers until late in the evening when it has cooled down.

“Jesus, rolling back to 25 percent without more government help,” Melendez worried aloud, describing how these new restrictions aren’t being met with the same amount of government assistance there was back in March.

Brad Weinstein, President of Appetites on Main in Exton, said his restaurant has fared relatively well because they’re already were known for outdoor dining. “We are blessed. We have a large outdoor patio… so it’s a real strength for us.”

He also noted that while making sure customers purchase food with their alcohol isn’t difficult, it does mean adding another task on top of all the regulations his staffers already have to follow.

All complained about how it seemed only restaurants are getting the brunt of these regulations. “I feel that policies [issued to combat coronavirus] should apply to all businesses,” said Darlington. He also said the regulations seem like an attack on small businesses, while big retail stores like Lowes and Home Depot are allowed to be open with little restrictions.

Melendez lamented restaurants have become a “target for these regulations,” saying of the strict enforcement: “We have the state police breathing down our necks and they don’t approach us as cornerstones of our business communities; they approach us as if we’re breaking the law…. We’re not criminals. We’re trying to survive and feed our families,” said Melendez.

The slowdown has led to worries that the economic rebound from the lockdowns could reverse itself. Melendez and Weinstein both haven’t laid off any staff, and Melendez is hoping they’ll get a little more leeway soon, but he did say “it’s difficult.”

Darlington voiced frustration with the fact the restrictions were being placed on them even though cases are not rising in the Delaware Valley. “If Governor Wolf is going to have a policy, it should be regional, just as it was in the beginning,” he said, referencing early restrictions that shut down Philadelphia and the suburbs first but kept other parts of the state open.

“When they did the reopenings, they did it by county. So why not continue doing that,” asked Weinstein. He did say, however, “let’s not wait until we see an outbreak” to put in place mitigation efforts, but he did add that those measures shouldn’t punish an entire industry.

A spokesman for Governor Wolf defended the restrictions in a statement to the Delaware Valley Journal, saying, “Both state and federal public health agencies have recognized the closure of restaurants and bars as an effective mitigation effort to prevent the spread of COVID-19.”

The statement went on to defend the statewide approach of the new regulations, saying that data confirmed “a need for more than county-by-county mitigation, but rather a focus on statewide efforts because people are free to travel and because modeling strongly suggests case increases will spread from the southwest to the north and east of the state.”

Darlington said many restaurant owners are facing grim days ahead. “I don’t believe any restaurant can maintain solvency for an extended period of time based on these regulations… I don’t know any business that can sustain 40, 50, 30 percent revenues.”

Weinstein said that while today his business is safe, “in three months or five months from now when the weather changes and I have to go back [inside] with 25 percent with no bar or outdoor dining,” then his business will be in jeopardy.

But Melendez presented optimism that he can weather this storm.

“I was homeless at some point in my life. I moved to this country 31 years ago with $30 in my pocket. I will fight with my life to keep my restaurant to feed my family.”

Overdoses Up Slightly in Montco and Chesco, but No Spike… Read More