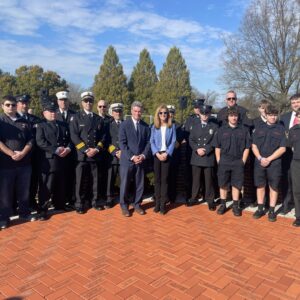 This year, the ceremony honored Morton-Rutledge Fire Company Captain Michael Malinowski.  Captain Malinowski died on December 3, 2019, after responding to a call for downed wires and trees. Following the call, he reported to officers that he was feeling ill. At work the next morning, he had tightness in his chest and was taken to the hospital, where he later passed away.

Captain Malinowski was a 1997 graduate of Gloucester City Junior-Senior High School, where he played football, baseball, and ran track. He began volunteering with the Gloucester City Fire Department as a teenager and then became Captain of the Morton-Rutledge Fire Company Station 13 in 2019, where he also served on the Board of Directors. Captain Malinowski is survived by his wife, Melissa, and his five children, Bailey, Michael Jr., Matthew, Cooper, and Harper.

The ceremony paid tribute to Captain Malinowski and honored his heroism and selfless dedication to the community. His name was added to the Memorial Wall as family, friends, and members of the Firefighter and EMS gathered to celebrate his legacy.

Council extends its heartfelt sympathy and gratitude to Captain Malinowski’s family, friends, and the firefighter and EMS community.