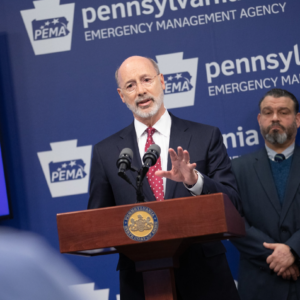 Governor Tom Wolf has been named “Employee of the Month,” and to no one’s surprise it didn’t come from the Republican-controlled General Assembly in Harrisburg.

But Mike Morgan of Breakwall BBQ in Conneaut, Ohio, was more than willing to bestow the honor.

Erie County was one of the first counties Gov. Wolf moved out of his coronavirus “red” shutdown phase into the less restrictive “yellow” back in early May. But since then, Erie County hasn’t been able to progress to “green” like most of the other counties in the far northwest corner of the state.

“We’ve broken all kinds of sales records, and we know that a big chunk of it is that Pennsylvania is shut down,” Morgan said.

“I’ve heard that other joints in West Virginia and Maryland are looking to do the same [as the restaurant],” Gerow told Delaware Valley Journal. “With the line of plaques the governor could line up on his wall, he might end up being the ‘Chamber of Commerce Man of the Year’ in a couple of these states.”

A free-market think tank in Ohio says Morgan’s windfall represents good news for Ohio, though they say it’s unfortunate that it comes at the expense of Pennsylvania’s private sector.

“With Ohio’s restaurant and bars being some of the hardest hit businesses during the pandemic, it is great to hear a story of one Ohio small businesses owner doing so well and wishing his fellow restaurant owners in Pennsylvania the same,” Lisa A. Gates, vice president of communications for The Buckeye Institute told Delaware Valley Journal.

“By reducing government regulations — which The Buckeye Institute has recommended since the outset of the pandemic — Ohio is proving that it is possible to safely open businesses, allow workers to earn a living, and enjoy a great meal at your local restaurant.”

Morgan’s sales spike is reminiscent of the flood of Pennsylvanians crossing state lines to buy liquor — illegally — when stores were abruptly shut down right before St. Patrick’s Day.

In the “yellow” phase in Pennsylvania, restaurants can offer outdoor seating as well as take out. But even when a county moves into the “green” phase, restaurants are only allowed to seat at 50 percent capacity.

Still, the limited reopening in “yellow” isn’t working for many restaurants.

A separate report from Erie News Now noted that a popular breakfast joint would have to close until the county moved into “green,” because they have no outside seating, and doing limited takeout wasn’t worth the cost of doing business.

Despite the teasing poke at Gov. Wolf, Morgan says he feels for his Pennsylvania business owners just a few miles on the other side of the state line.

“Yes, we’re busier than normal, but we do well anyway,” he said. “I want them people over there to open up and feed their families. I feel for the waitresses. They gotta feed their kids.”

A request for comment to Gov. Wolf’s office was not returned.