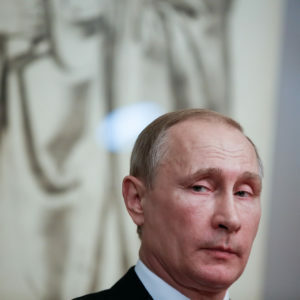 Putin Should Feel the Wrath of the International Community — Now

Russian President Vladimir Putin should suffer sanctions regardless of whether he pulls back from attacking in Ukraine. He has already violated his neighbor and an attack will be additive. His tyrannical bullying has to be addressed now — and later.

The Russian dictator has pushed Ukraine to the brink of annihilation. He caused NATO to expend resources needlessly. He has threatened the international economic system with calamitous failure. He essentially has wrested control of Belarus.

Yet now, international leaders are intent on affecting Putin’s decision to attack as though that in and of itself is sufficient. We have to acknowledge Putin’s wrongdoing and decide to punish him now for what he has already done, and more if he continues.

He has proven he is a malignant actor. Even without a full-scale invasion, Ukrainian troops died during what was likely a provocation in hopes Ukraine will attack and thus give license for Russia to launch a larger incursion.

The attack was labeled as, “shelling by pro-Russian separatists in east Ukraine.” Read that as meaning it was directed by Russia.

Russian troops, now totaling an estimated 150,000 ground forces, , in addition to innumerable aircraft at the ready and ships available in the Black Sea, are poised in position for attack. That’s an act of war even if he moves no farther into Ukraine.

Belarus allowed Russia access to its territory to terrorize Ukraine. Russia was ostensibly in Belarus for training, but now that the scheduled training period has ended, they have decided to remain in place.

Even the dopes in Belarus did not likely understand that Russian troops would occupy their land on a permanent basis. Some will suggest that by cozying up to Putin Belarus had it coming but Putin’s annexation of Belarus is not good for anyone and we must demand the evacuation of Russian forces.

Make the of economic sanctions being considered public now.

Several items on the list should be painful and immediate.

The rest could come after the invasion.

The claim by Pentagon spokesman, John Kirby that if sanctions were executed now Russia would have no reason to pull back can be dismissed out of hand. (It is hard to believe that the Pentagon and White House really discussed this idea and thought it was valid).

Ukrainian President Volodymyr Zelenskyy wants the international community to “develop an effective package of preventive sanctions to deter aggression.” His logic is unassailable.

“I agree with President Zelensky, sanctions are no good after the shooting starts,” said former Veterans Affairs Secretary and former Undersecretary of Defense Robert Wilkie in an email. “If Biden was serious, he would have slapped sanctions on in March telling Putin they come off when you pull your troops back.”

One sanction that will gain the attention of other would-be tyrants is to stop the Nord Stream 2 pipeline permanently. Dismantle it. The West should state that no such project can take place for a minimum of 20 years. Let Putin and the rest of the world know this is the price for terror. (Then ask Beijing if the Chinese Communist Party is paying attention). Should Biden decide to reverse his energy policy that limits U.S. production of energy, he could almost immediately soften the blow for Europe by increasing U.S. exports of energy beyond current levels.

The West must make demands. Putin has to clearly understand there is no upside in this matter for him or his regime. He has already made a gross error in judgment and an invasion would simply exacerbate what he has done.

On February 20, the Biden administration announced it agreed in “principle” to meet with Putin to discuss “security and strategic stability in Europe.” Such discussions hopefully will not devolve into granting Putin concessions of any kind. It remains to be seen how such talks–if they occur–will cause Russia to pull back from Ukraine’s border.

It also remains to be seen what role Ukraine plays in any meeting. It is, after all, Ukraine that would be discussed. Any meetings without an active Ukrainian involvement portray to Russia that the U.S. sees Ukraine as an inferior and that this matter is for the major players.