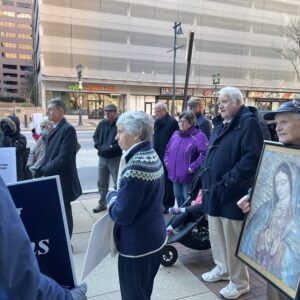 Protestors listen to speaker outside courthouse while a jury is selected for the Mark Houck trial.
News

As lawyers inside Philadelphia’s federal courthouse selected the jury to pass judgment on Mark Houck in his upcoming trial, supporters outside said prayers and offered encouragement for the Bucks County pro-life activist they believe is the victim of a political prosecution.

Houck, 49, of Kintersville in Bucks County, is charged with violating the FACE Act for an altercation with abortion clinic escort Bruce Love outside a Philadelphia facility. According to the indictment Houck “verbally confronted” escort Bruce Love “and forcefully shoved B.L. to the ground” outside the Planned Parenthood Elizabeth Blackwell Health Center on Locust Street in Philadelphia.

Houck could face up to 11 years in prison if convicted.

Evangelical pastor William Devlin led the group of 30 or so protesters reciting the “Our Father” and singing “Amazing Grace.”

The case has national implications regarding whether an escort who volunteers at abortion clinics can be considered an abortion provider. Legal experts who support Houck said the entire case was a stretch of the original law and have suggested the prosecution is motivated more by abortion politics than law enforcement. Those concerns were heightened when federal authorities chose to send some 25 heavily armed FBI agents to arrest Houck at his home as his wife and frightened children looked on.

Houck was released on his own recognizance the same day. 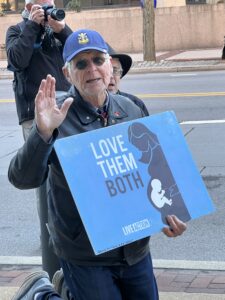 Houck has garnered the support of many in the pro-life community. The Thomas More Society, a public interest law firm, is helping with his defense.

“America is great because she is good. If America ceases to be good, she will cease to be great,” said local pro-life leader Patrick Stanton at the gathering. “And if this kind of thing can happen to a law-abiding father and husband, America is trembling.”

“It’s important for us to stand together,” said Marlene Downing with the Pro-Life Union of Greater Philadelphia. “There is a lot of evil rising up. It’s because they feel like they can [act this way] because people who are Christian are not standing for what they should be standing for. And look at you guys out here, standing for the right thing.

“After a British military victory during World War II Winston Churchill was famously quoted as saying, ‘This is not the end. It’s not the beginning of the end. But it might, perhaps, be the end of the beginning.’ That’s the way I felt when Roe was overturned last year. Because I knew the battle was just beginning in the states and the increasing hysteria of abortion rights supporters led me to believe we were in for an onslaught. What is happening with Mark Houck is emblematic of that. And we need to be prepared and vigilant.”

Malvern resident David Walsh who was protesting said, “I’m here to support Mark Houck and his family and pray for the successful relief of these charges and pray the federal government steps up in the Department of Justice and does what they should be doing (to bring charges against those vandalizing pro-life maternity centers and churches).”

Walsh often does sidewalk counseling for pregnant women outside the Planned Parenthood clinic in West Chester. Houck had been a sidewalk counselor for many years before his arrest.

Ted Meehan of Newtown Square said he had been involved in the pro-life movement for 40 years. 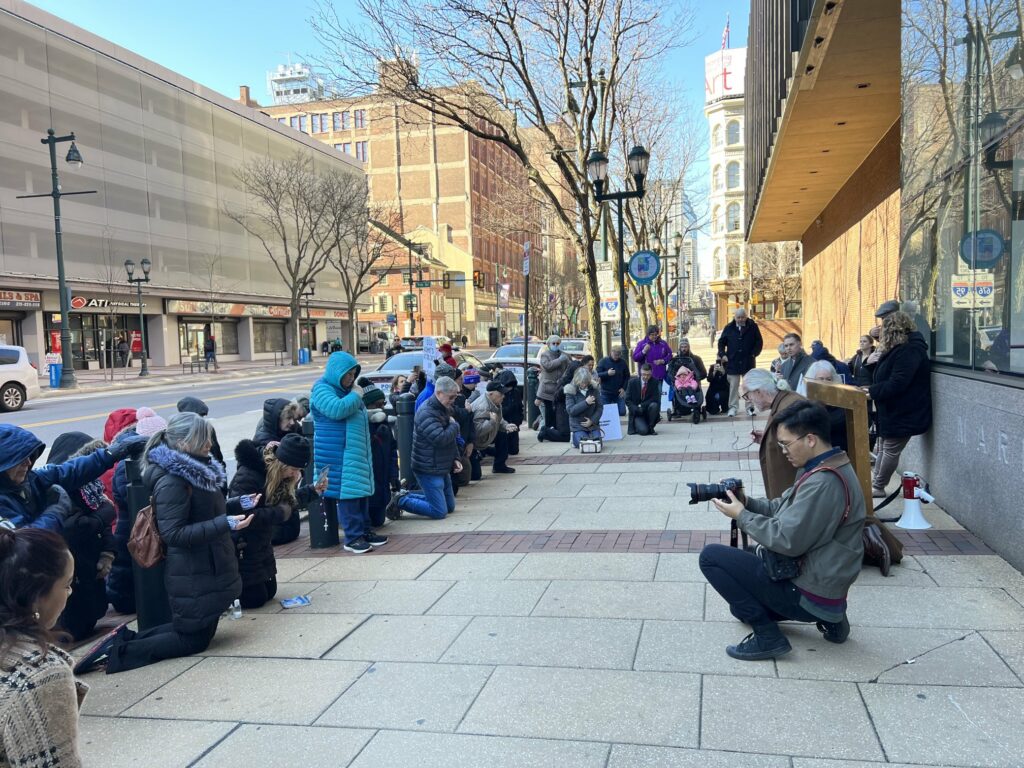 “I’m here because of the injustice of what’s going on to Mark Houck and what was done,” said Meehan. “And compare that to the ongoing, almost daily Churches and pro-life centers…It’s a grotesque double standard.”

A Lower Moreland resident, Devlin is affiliated with Infinity Church in the Bronx and is the director of Widows & Orphans, which goes into war zones to help. He is a Vietnam veteran who received a Purple Heart.

He and his wife Nancy assist formerly sex-trafficked girls “so the pro-life commitment goes beyond just saving babies,” said Devlin.

“I’ve been a colleague of Mark Houck for 20 years,” he said. “My organization and Mark’s organization have worked together on a number of issues. I’ve known Mark as a father, as a husband, as a Christian believer.”

Houck has pleaded not guilty to the charges, and his attorneys plan to argue that the FACE Act does not cover a clinic escort in any case.

The trial before Judge Gerald Pappert is expected to last through the week.