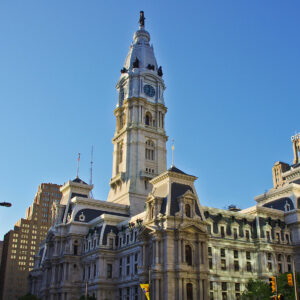 When builders or business owners look at a distressed neighborhood in Philadelphia, they may see a potential opportunity– to build a new manufacturing workspace or multi-unit housing.

But when Philadelphia Councilmember Helen Gym sees that construction, she sees a potential injustice. And she’s proposed a new law to force builders and business owners to undergo additional scrutiny when trying to build in these neighborhoods. She calls it “environmental justice.”

People concerned about economic growth call it a potential nightmare.

Gym’s legislation, the Community Health Act, requires the Department of Public Health to develop an environmental justice map that identifies communities that experience excessive exposure to pollution. The result would be a “Cumulative Impacts Assessment,” which would then be used before issuing any new or renewed permits “for any industrial siting, activity, or operation” that could emit pollution.

“We are empowering the city to use their full authority to fully assess how new projects will impact our communities – ensuring new projects don’t compound harm or exacerbate the existing disparities,” Gym said in a statement. “This will make Philadelphia a national leader in advancing environmental justice and build a livable, breathable, healthy future for our city.”

The legislation would also empower something called the Environmental Justice Advisory Committee, which would help implement this additional level of permitting. The 17 members include self-described “climate justice activists” like Terrill Haigler, a former professional dancer and sanitation worker best known for his “YaRavTrashman” Instagram account.

The city’s health department would use these reviews to “make a determination to issue or to not issue a permit, license, or other approval,” according to the proposed law.

“As a Black woman from Nicetown, where one in three kids has asthma, including many of my own relatives, I know firsthand what the toll of environmental racism feels like, and with so many of our community members lacking access to quality healthcare, the cumulative impact is devastating,” said Brooks. “We can no longer accept the status quo of working-class Black people living shorter lives in toxic neighborhoods filled with pollutants – because it is literally killing us.”

Advocates for business and economic growth, however, are concerned. They see an additional layer of bureaucracy in a city that’s already a difficult place to get projects permitted. And, they note, Gym’s plan wouldn’t put the decision to conduct an “environmental justice” review in the hands of city officials or zoning experts. Residents could petition to force businesses or builders to undergo the potentially lengthy — and costly — review.

“Philadelphia’s municipal leaders would better serve their community by focusing on reducing crime or expanding educational opportunities for youth than by pursuing another layer of bureaucratic control in the name of ‘environmental justice,'” said Gordon Tomb, senior fellow of the Commonwealth Foundation. “There are thousands of state and federal regulations to ensure a safe environment and reduce pollution. In fact, Pennsylvania alone has more than 25,000 environmental protection regulations on the books.”

Pennsylvania is hardly a pro-business state. A recent data analysis by Wallethub ranks Pennsylvania 44th for its business environment. And a 202o ranking by Arizona State University’s Center for the Study of Economic Liberty listed Philadelphia as one of the toughest cities in America to do business. “If you’ve got barriers to entry for new businesses or make it difficult to expand existing businesses, you’re by definition also restricting the employment prospects,” said Stephen Slivinski of ASU at the time.

“I’m honestly amazed when businesses undertake projects in Philadelphia,” Knepper told DVJournal. “Their level of local regulation and turning a blind eye to the blatant harassment undertaken by organized labor at open shop construction projects are already an enormous barrier. Adding another piece of unpredictability to the construction process will drive away more potential employment opportunities.”