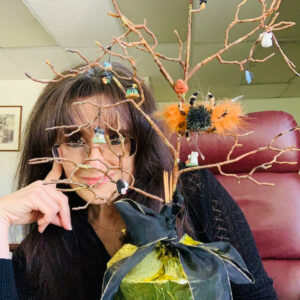 Christine Flowers with her Halloween Tree.
[IS] Opinions

I have a small Halloween Tree on my desk that my mother made over 20 years ago.  I pull it out every October 1, mostly because it reminds me of Lucy, but also because it’s a festive note in an otherwise dour professional office. Tiny goblins, witches, ghosts, and ghouls hang from its branches, and it’s been a useful distraction for little kids who are bored out of their October gourds sitting on their parent’s laps as we discuss immigration options.

Halloween is, after all, about the kids. It’s true that adults have hijacked the holiday with their sexy zombie costumes and their spiked beverages (bobbing for apples can lead to serious bobbing and weaving as parties progress,) the 31st of October will always be a time for childhood wonder.

At least, that’s how I grew up. Today, sadly, there are adults who want to ruin that wonder, and some of them live right here in Lower Merion. The school district recently announced it was canceling the Halloween parade this year, out of concern for those who “don’t celebrate.” They also mentioned that they were worried about the safety of kids. But that’s an old trope that’s been around since I was 5 over a half-century ago and we were told not to bite into that Hershey Bar without first checking for razors.

No, the real reason that Lower Merion has decided to destroy the happiness of countless elementary school children is that they want to promote “inclusivity.” According to an email sent to parents, they were worried about offending students who don’t participate in Halloween because of the dreaded “religious reasons.”

I’m trying to figure out what those might be. There are some Christian sects that seem to believe dressing up as ghosts and witches and begging for candy is akin to some satanic ritual, but they are few and far between. Frankly, there are a lot of things that are much more satanic than cute little kids trotting around politely asking for treats. Politicians canvassing for votes come to mind. So do those Fetterman signs on Delco lawns. But I digress.

Amy Buckman, who used to be with Channel 6 and is now the director of Lower Merion’s school and community relations, insists that there’s nothing nefarious about the move and that the district is truly concerned with the safety of the kids, noting that “just the thought of having an entire school population of young children in a field surrounded by adults that we couldn’t possibly screen was worrisome.” I’m wondering why, after decades, this is the year that they decided to squeeze the last drop of joy out of a treasured holiday, decades after the first missing child appeared on a milk carton. What makes today that much more dangerous for a little tot than yesterday?

The question answers itself. Adults have become overly cautious, overly triggered, and overly concerned with control. They monitor every move of their tots as if they were General Eisenhower and the kids were about to storm the beaches of Normandy. And they want to impose that iron-fisted control on other people’s children as well.

Add in the additional, rather suspicious concern about religious freedom and you know that this is all of a piece to train our kids to be afraid, timid, and apprehensive of offending others in this pristine society of pure tolerance. I find it rather laughable that we have a school district worrying about the religious concerns of some parents even while school districts across the country are punishing people for not using the correct pronouns, even when this violates someone else’s religious beliefs.

Eliminating this holiday parade is much scarier, in my opinion, than anything a child might encounter on a dark and chilly October evening.