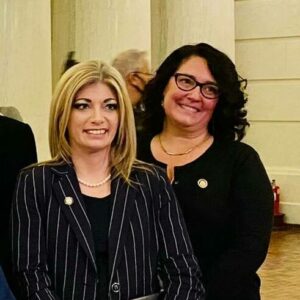 “We are writing to request that you invoke your authority under the Clean Streams Law to file an emergency injunction to halt construction on the Mariner East line,” wrote state Sen. Katie Muth, D-44, and state Reps. Dianne Herrin and Danielle Friel Otten, both of Chester County. They also asked Shapiro, the likely Democratic nominee for governor next year, to also file a “nuisance lawsuit” against the pipeline company, Sonoco/Energy Transfer (ET).

However, an inspection conducted by the Chester County Conservation District on Tuesday found the discharge referenced by the legislators was simply soil runoff from a nearby construction project and completely unrelated to the pipeline.

“The purpose of this inspection was to inspect the constructed sediment basins as there were reports of turbidity issues in Marsh Creek Lake and it was believed to be the Sunoco Pipeline Project,” according to the inspection filed with the state Department of Environmental Protection. “But as in past events, it was traced back to the sediment basin discharges from the Preserve at Marsh Creek project site. This appears to be the source of the recent turbidity as well.”

The discharges were completely unrelated to the pipeline, inspectors found.

It is just the latest in what energy industry insiders view as “Hail Mary” attempts to block the pipeline that is all but completed. Some Delaware County politicians, like Rep. Friel Otten, have made careers out of opposing it, but that was when construction problems within the community were at their peak. Today, those issues are largely resolved.

“Lawmakers who oppose Mariner East have had their voices heard by regulators every step of the way through the development of this pipeline network,” said Kurt Knaus, spokesperson for the Pennsylvania Energy Infrastructure Alliance. “Just as they had a chance to question construction alterations at Marsh Creek during DEP’s June hearing. They failed to make their case then because the science didn’t support their hysteria.”

Every construction project has some impact on the community, and even pipeline supporters acknowledge there have been issues with sinkholes and inadvertent discharges of non-toxic drilling fluids. Energy Transfer has paid more than $24 million in civil fines, and last year it entered a consent decree with the Chester County District Attorney’s office to resolve outstanding issues.

In response to the legislators’ letter, Shapiro’s office released a statement:

“Our office is using all the tools we have to protect Pennsylvanians’ constitutional right to clean air and pure water including the criminal charges we announced late last year. The legal standard needed to obtain a temporary restraining order in these cases is extremely high, and we will continue to be vigilant to do all we can to protect clean water in every community in Pennsylvania.”

It is unclear whether Shapiro’s office knows now that lawmakers’ initial claims about Sunoco Pipeline causing the turbidity were false, or whether the true cause as determined by the Chester County Conservation District has been shared with the attorney general.

In October, Shapiro announced criminal charges against the pipeline company. But the Attorney General acknowledged at the time the issues in his complaint have already been addressed by the Department of Environmental Protection through civil actions, for which the company has already paid fines and made restitution. Critics say Shapiro’s actions are designed to shore up his green politics bona fides, not shut down the pipeline.

The pipeline moves propane, ethane, and butane from the Marcellus Shale gas fields in Western Pennsylvania to the Marcus Hook facility in Delaware County. Given concerns about supply-chain issues and rising propane prices — and with construction-related issues all but over — pushing to shut the pipeline down now is a puzzling political decision.

How does shutting down a completed, job-creating, energy-producing pipeline after the construction is completed help the legislators’ constituents?

“Unfortunately, they continue to push to shut down the legally permitted project,” said Knaus, “even if they have to ignore the facts and bend the story to force it to fit their own false narratives.”