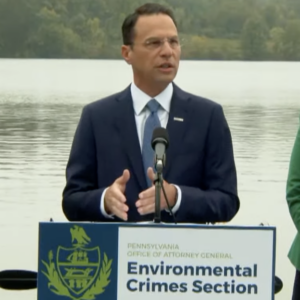 Attorney General Josh Shapiro, widely viewed as the likely Democratic nominee for governor next year, announced 48 criminal charges against Energy Transfer, the company building the Mariner East 2 pipeline, including one alleged felony. The charges were a result of a grand jury investigation.

The pipeline company “polluted our lakes, our rivers, and our wells and put Pennsylvanians health at risk,” Shapiro alleged. Most of the charges are for the accidental release of non-toxic drilling fluids used in the horizontal directional drilling process designed to reduce the project’s footprint. Shapiro held his press conference at Marsh Creek Lake in Chester County, the site of one such incident in August 2020.

“This was a major incident. But understand it wasn’t an isolated incident. This happened all across Pennsylvania,” Shapiro said.

Shapiro acknowledged that most of the incidents in the grand jury presentment have already been addressed by the Department of Environmental Protection through civil actions, for which the company has already paid fines and made restitution. 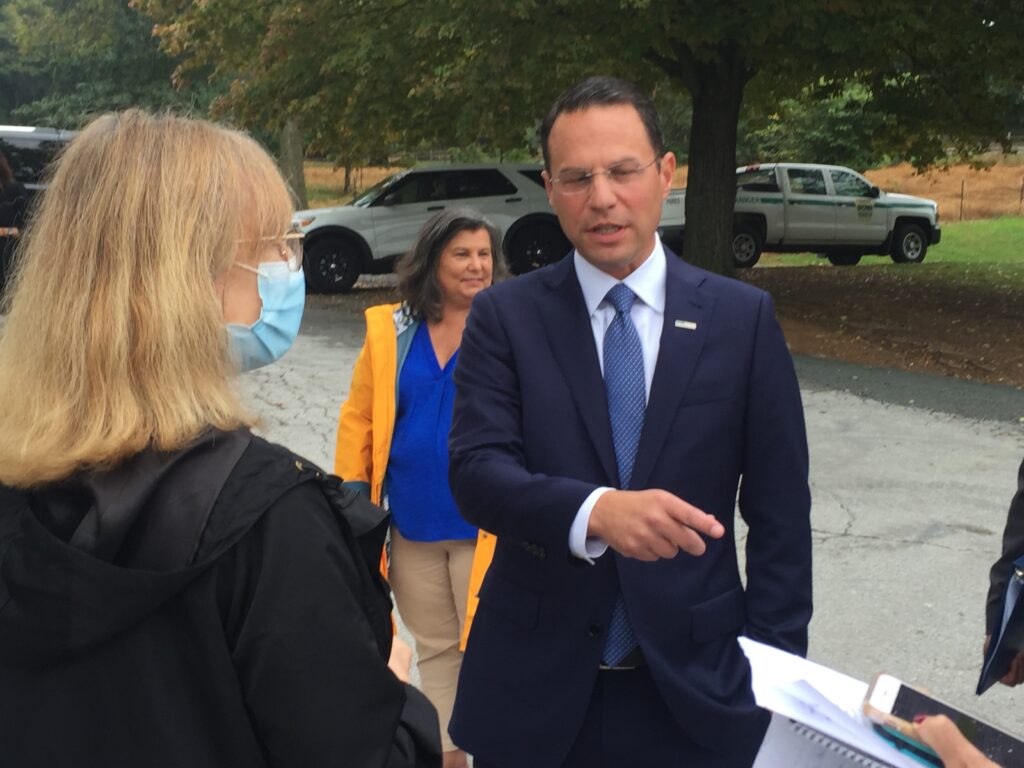 Josh Shapiro talks to a resident after his press event announcing charges against Energy Transfer over Mariner East pipeline.

“I’m here to tell you, that’s not enough,” Shapiro said. “It’s not enough. Corporations should not be treated leniently just because there is not a mug shot of Energy Transfer being arrested today. They should be held accountable to the fullest extent of the law. That is what we’re here to do.

With the pipeline nearly finished and just a handful of worksites remaining, some question if the timing of Tuesday’s event is related to Shapiro’s expected announcement of his bid for governor in the coming weeks.

“Not at all,” Shapiro told DVJournal after Tuesday’s presser.

In his remarks, for example, Shapiro touted his other high-profile prosecutions as attorney general of sexual abuse by Roman Catholic priests and a cover-up by the Church, when asked about whether non-disclosure agreements hamper prosecution.

Shapiro’s investigation into Catholic clergy was a centerpiece of his 2020 re-election campaign.

A small crowd of politically active pipeline opponents was also on hand for the press event, including progressive state Rep. Danielle Friel Otten. She released a statement calling for the nearly completed pipeline project to be shut down.

“Now that the attorney general and the grand jury have done their job, there should be no question: It is time for an immediate halt of the Mariner East pipeline project,” Friel Otten said. “I am once again calling on Gov. Wolf, the DEP, and the PUC to revoke Energy Transfer’s permits to operate in Pennsylvania.”

The Democratic-controlled Chester County Commission also issued a statement, saying it was pleased with the indictment, adding it was “long overdue.”

“In August 2020, we notified the Attorney General’s Office of the incident at Marsh Creek Lake involving Energy Transfer. At the same time, we asked Gov. Wolf to suspend Energy Transfer’s authority to construct and operate the Mariner East 2. In light of today’s charges, we repeat that urgent request.” 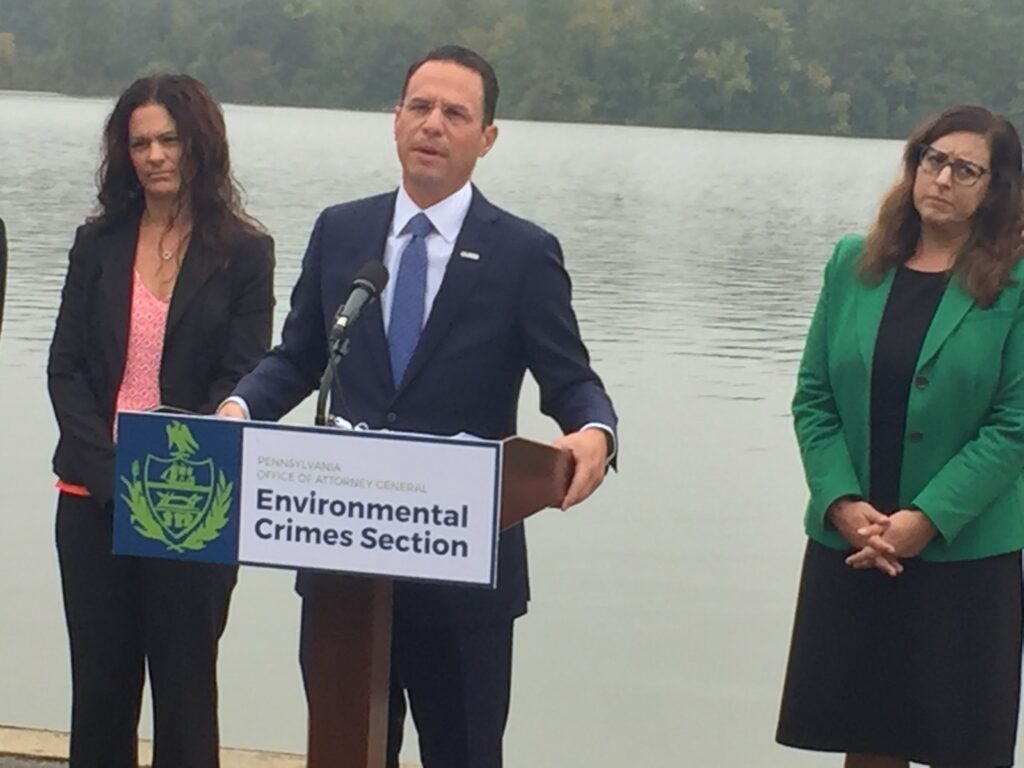 “We have been aware of the grand jury’s investigation and have cooperated with them and the Attorney General’s Office for several months in an effort to address and resolve any issues,” the company said in a statement. “Energy Transfer committed to complying with all the relevant laws of Pennsylvania, including the environmental laws, when it undertook this historic capital investment for the construction of a statewide natural gas liquids pipeline. We remain committed to a strict adherence to the laws of the Commonwealth as we conclude construction, which generated thousands of local jobs. We are committed to continuing the safe operation of the pipeline for the economic benefit of the Commonwealth.”

The 350-mile Mariner East pipeline is a key part of Pennsylvania’s energy infrastructure bringing natural gas liquids, such as propane, ethane, and butane, from the Marcellus and Utica Shale region in western Pennsylvania to the Marcus Hook Industrial Complex in Delaware County.

Pipelines have been a high-profile political target in recent years. On his first day in the White House, for example, President Joe Biden issued an executive order canceling the Keystone XL pipeline. In July, Dominion Energy and Duke Energy announced they were canceling the Atlantic Coast pipeline due to “legal uncertainty” in the face of repeated challenges from pipeline opponents. And the plug was pulled on the PennEast pipeline just months after winning a major victory before the Supreme Court for similar reasons.

Of the charges, Shapiro said, 45 of the charges were for illegally releasing industrial waste at 22 sites in 11 different counties. The press conference was postponed to add two more charges, he said.  The charges include a felony for “illegal and dangerous conduct” statewide, he said. Another charge was for using unapproved additives in their drilling solution and another for contaminating water supplies and a felony charge for willfully and consistently failing to report these releases to the Department of Environmental Protection as required, he said.

If convicted, a judge could impose fines on Energy Transfer. “This is an ongoing investigation,” said Shapiro, adding that more charges could be brought.

Lawyer Bruce L. Castor Jr., the former Montgomery County District Attorney and former Acting Attorney General told DVJournal grand juries have wide leeway in what charges to bring against a “target,” and prosecutors also have discretion in which charges to go forward with.

“The power to use a grand jury is enormous and the potential for abuse is high, which is why Pennsylvania prosecutors try to use their most experienced (prosecutors),” said Castor. “Violating the grand jury rules can have severe penalties. Used correctly, grand juries are highly effective.

“Whether a prosecution is motivated by political gain (as opposed to uncovering criminal activity) on the part of the prosecutor is always a risk,” Castor said.  “A prosecutor should never use his office to ‘hurt’ others with their powers in order to generate publicity to advance the prosecutor’s future electoral chances. Prosecutors that do that end up in ethical trouble and with any temporary successes overturned in the appellate courts. Of course, some gamble that electoral benefit in the short term is worth the long term risk to their careers and to their honor and reputation within the profession.”

Delaware County District Attorney Jack Stollsteimer called the charges against Energy Transfer “a critical first step in seeking justice for the thousands of Delco residents whose quality of life has been negatively impacted by the pipeline. Delaware County residents should know that this investigation and prosecution was begun by a referral from this Office to the Attorney General. Specifically, my environmental crimes prosecutors brought the evidence to the grand jury that led to the charges related to the Glen Riddle and Tunbridge Apartments. I am immensely proud of the contribution this office has made to this prosecution.”

“For those who live in close proximity to the pipeline, there has been no end to the disruption to many things we take for granted such as plentiful access to clean water for drinking, cooking, and daily life,” Quinn said.