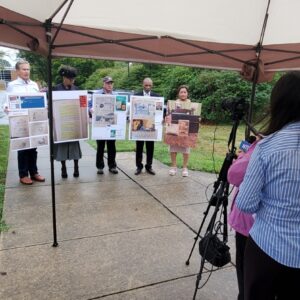 The East Whiteland Police Department sent three cars to the Great Valley High School District Wednesday where Fenicia Redman, the mother who is suing the school district over obscene library books, was being interviewed by a TV reporter.

The Malvern mom brought friends to hold the posters she had made that showed graphic pictures from the books. Redman and her friends, along with the Epoch Times video journalists, were told by a police officer that they had to leave.

“We had just completed the (filmed) interview and the journalist was asking me a few more questions,” said Redman. Her friends holding the posters called out to her that the police were there. 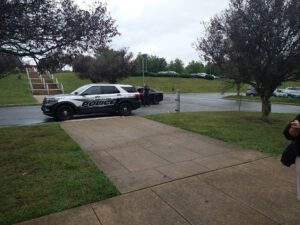 “I turned around and an officer, Sgt. Mitchell, comes out of his vehicle and I walked toward him,” said Redman. “He said, ‘The district wants you off the property.’”

Redman told him she was the parent of a student at the school and a taxpayer and that she was being interviewed about her lawsuit against the district. The officer told her they had to leave. So they left peacefully.

“I was not afraid,” said Redman. “We were talking about a real problem, which is inside the school (the obscene books).”

“It’s incredulous,” said Redman. “I brought these very pictures to the police department and they did not go into the school to investigate.” Instead, the police turned the matter over to the Chester County District Attorney’s Office, which did not find it to be a criminal offense.

“I’m not giving up,” said Redman, who has a Go Fund Me page to raise money for her suit. “This is ludicrous. I’m thankful they (the police) were polite…We won’t be intimidated. We won’t be silenced. We’re just getting started.”

Lily Sun, the Epoch Times reporter who was interviewing Redman, said she was startled when the police came.

A spokeswoman for the school district did not respond to requests for comment.

Former Great Valley School Board President Bruce Chambers was there for the interview, holding a poster.

“We were set up in the lower parking lot away from the high school and middle school buildings and in an area that had a bench for seating,” said Chambers. “We were not disturbing anyone, and indeed, the school day was over so the parking lot was nearly empty. A camera and microphone were set up so it was obvious what was happening.

“Sending the police is indicative of the bunker mentality of the school district and its refusal to engage with the public. Their first reaction was to send the police. Ridiculous. All they had to do was send a staff person to talk with Fenicia and they would have immediately found out what she was doing.

“This further confirms for me that the school district has no respect for the public who is paying for everything. They are incompetent and their reaction was pathetic.”

In her suit, Redman describes and includes pictures from the books: “Gender Queer” with graphic pictures of sexual acts, “Tantric Sex,” which is a manual describing sexual acts, “All Boys Aren’t Blue,” which also shows details of sexual acts, and “PUSH” that includes a female child who is raped by her father. In “Fun House” there are scenes of women having sex with women.

When she and the group of other concerned parents took the book posters to the state Capitol to show lawmakers exactly what schools have in their libraries, a Capitol police officer ordered her to remove some of the posters because children might see them.