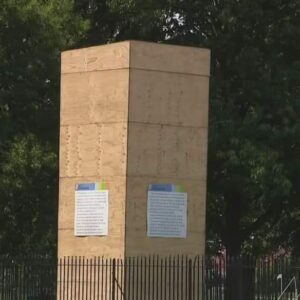 A statue of Christopher Columbus located in Philadelphia's Marconi Plaza covered in a wooden box. (CREDIT: Facebook)
[IS] Opinions

I have spent the last few days celebrating the return of the Columbus Day Parade with my friends in South Philly who are the driving force behind the parade. At the annual dinner for the parade, I gave the introduction speech for George Bochetto, who was given the Frank Rizzo Award for his battle to free the Columbus statue from its plywood enclosure at Marconi Park in South Philly.

In his speech, Bochetto told us he thought it was imminent that a judge was ready to stop this ridiculous farce and direct Mayor Jim Kenney to allow Columbus to be free. Philadelphia Judge Paula Patrick did that and set off days of competing arguments.

The first question behind all this is, why is Kenney so dug in on this issue, at a time when the city has the highest per capita murder rate in the country?

First, there is incredible bad blood between Jim Kenney and his former patron, former state Sen. Vince Fumo. In fact, at the parade banquet, speaker after speaker detailed how Fumo helped Kenney go from a gofer to city council to the mayor’s office. Fumo is still loved by many people in South Philly who support the traditions of the neighborhood.

Second, as a progressive in very good standing, Kenney is in deep conflict with the traditions of much of South Philly. South Philly still reveres Frank Rizzo. Kenney took away the giant statue of Rizzo in front of the Municipal Services Building in the middle of the night and stored it in a warehouse. Kenney and other woke progressives also lost a big battle with South Philly conservatives when they stopped a so-called safe injection site from being placed over at 13th and McKean.

Kenney’s actions – including his boxing up of the Columbus statue and his attack on the Columbus Day city holiday by replacing it with Indigenous Peoples Day — have come to be seen by the people that I’m friends with in South Philly as anti- Italian bias.  I don’t know if Kenney is anti-Italian, but I think it’s clear that he doesn’t think Italians have the political muscle anymore that other groups have. City Councilman Mark Squilla is really the only prominent elected official.

I think Kenney is both settling old personal scores and using Italians and Columbus as a proxy to those in the city who might still try to challenge the new woke regime.

My radio show listeners see an even bigger picture in this battle. They see it as part of the huge struggle nationally between traditional America and those who are trying to erase the traditional values and heroes of half or more of the country. To add insult to injury, Kenney’s position is the statue cannot be unboxed because it offends some people who might try to deface it and end up in conflict with Italian- Americans. This is the same mayor who dismissed the rioting, looting, and battles with the police last summer in the wake of the killing of George Floyd by saying the First Amendment trumped everything else.

A Commonwealth Court reviewed Mayor Kenney’s appeal and approved a stay on the box’s removal Saturday.

With two judges in Philadelphia having ruled that the box around Columbus must be torn down, it is hard to say when all this will end.

I’m just glad that the spirit of South Philly that I grew up in is still very much alive.