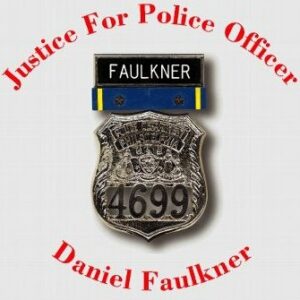 December 9, 1981 is a day that lives in infamy in the Philadelphia area. That’s the day Mumia Abu Jamal shot and killed police officer Danny Faulkner at point-blank range at 13th and Locust Streets in downtown Philadelphia and set off a 40-year battle that continues to this day. On that day, Ronald Reagan was in his first year as president, regular gas was $1.30 a gallon, and the Dom Giordano Show would not debut for six more years.

In order to remember Faulkner, support his widow Maureen, and counter those who still are supporting the world’s most celebrated cop killer, Faulkner’s police partners have asked me to announce that on December 9, 2021, there will be a 10 am. mass followed by a luncheon at the Fraternal Order of Police headquarters on Caroline Road in Northeast Philadelphia. They would like everyone to turn out to say we don’t forget and are united in the idea that justice for Danny demands Mumia serve his full life sentence.

The biggest fear is now that if he is reelected Philadelphia district attorney, Larry Krasner will soft-pedal his defense against Mumia’s ongoing appeals and that Mumia will either get a new trial or be released from prison due to medical issues.  The logic is that if there were a new trial there would be a huge advantage to Mumia since witnesses have died and there would be tremendous pressure on a jury to find reasonable doubt.

That pressure would be driven by the fact that Mumia is one of the biggest celebrity criminals we’ve ever seen. He has been lionized by Ben and Jerry, Danny Glover, and dozens of Hollywood celebrities. He has authored several books and Forbes and others have set his net worth at $1.5 million. He has been the commencement speaker for Antioch University and other colleges. Twenty-five cities, including Paris and Montreal, have named him an honorary citizen. In fact, the town of Saint-Denis, a suburb of Paris, has named a street after him.

In addition to the ongoing battle with Mumia, this event will probably also give insight into the upcoming battle for governor in Pennsylvania. The endorsement of the FOP and other police unions is highly sought, and many times goes to the Republican candidate. Former U.S. Attorney Bill McSwain is one of the leading Republican candidates and is very much a law-and-order guy. However, Pennsylvania Attorney General Josh Shapiro, who is the Democratic nominee for governor, is often at FOP events where I’ve served as master of ceremonies. They have included events where Maureen Faulkner and others have properly attacked Mumia and his supporters. I expect McSwain, Shapiro, and others will be attending this event and the FOP might not endorse anyone in the governor’s race, which would help Shapiro.

Forty years into this struggle with Mumia and his enablers, my thoughts turn to the book Maureen Faulkner coauthored on all this. She talked about the fact that, like Mumia, she too has been given a life sentence. I have chronicled this life sentence on my radio show over the last 34 years. I’ve seen her calm courage and her drive to her honor the memory of Danny Faulkner.

I will be at this event and I am encouraging the public to show up and remember Faulkner and honor the sacrifices that cops and their families make every day. Forty years after the fact or a hundred years after December 9, 1981, one thing remains clear: Mumia brutally murdered police officer Danny Faulkner.