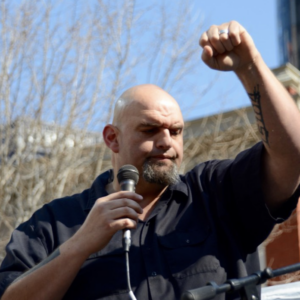 Want to know exactly where John Fetterman stands on hydraulic fracturing or ‘fracking?’ Good luck, say both Republicans and environmentalists.

On the one hand, the U.S. Senate candidate is a self-described “Bernie Sanders progressive,” part of the liberal wing of his party that supports Green New Deal restrictions on fossil fuels and mandates for renewable energy.

On the other, Fetterman said earlier this year he does not support a moratorium, arguing the transition to renewable energy will lead to a “de facto moratorium.”

Now comes a Fox News report of Fetterman’s posts on the social media site Reddit calling fracking a “stain on our state.”

So, what is the progressive Democrat’s stance today? DVJournal reached out to the Fetterman campaign repeatedly after the Fox News story broke. Each time, it declined to comment.

When he first ran for U.S. Senate in 2016, Fetterman declared his support for a ban on new fracking projects. During that campaign, he later adjusted his position under pressure from labor unions, saying he would support allowing new fracking if certain conditions were met, including higher taxes and more inspections.

Fetterman’s rhetoric in his 2016 Reddit posts was clear: “I’m not pro-fracking and have stated that if we did things right in this state, we wouldn’t have fracking. The industry is a stain on our state and natural resources. But yes, of course I worry about the viability of getting a ban on fracking done when the industry is already so entrenched in Pennsylvania,” he said, adding that he had “signed the Food and Water Watch’s pledge to end Fracking.”

Asked about Fetterman’s stance today, Food & Water Watch said Fetterman “had it right when he signed” six years ago when he added his name to the group’s anti-fracking pledge.

“We’re hopeful that as the ever-deepening impacts of dirty fossil fuel extraction are felt in Pennsylvania and around the globe, he and other candidates from both parties will fully acknowledge the seriousness of the climate crisis we face and understand that the only real solution is to transition rapidly to clean, renewable energy – not frack more,” Seth Gladstone of Food & Water Watch and Food & Water Action told DVJournal.

Pointing to “Fetterman’s own Allegheny County,” Gladstone said fracking was just banned on 12,000 acres of county parkland under immense pressure from the community.

“More and more, Americans are realizing the fight against fracking is a fight against filthy pollution and fossil fuel industry profits, and a fight for public health and climate stability that we absolutely must win.”

“Over the years, Fetterman has flipped his position, broken promises, and ignored significant racial and environmental justice issues in his own backyard,” Hart said. “In his 2016 Senate campaign, Fetterman signed a pledge supporting a statewide moratorium on fracking,” wrote Hart. “At one debate, he criticized the pro-drilling record of rival candidate Katie McGinty, saying she ‘brought fracking to Pennsylvania.'”

At the time, Fetterman told McGinty: “You cannot have it both ways. There is no such thing as a green fracker.”

That same year, Hart points out that Fetterman was a top supporter of Bernie Sanders’s presidential campaign, saying that the senator’s call for a fracking ban would be a “winning issue” in Pennsylvania.

“But in 2020, Fetterman took the opposite position, claiming that anti-fracking candidates would lose Pennsylvania,” Hart continued. “Why the sudden shift? Fetterman has claimed that stronger regulations have made fracking safer. But he has never explained what those were, exactly — and the mounting scientific evidence of the serious hazards associated with fracking tells us all we need to know about the threats that drilling poses to our health, our air, and our water.”

While Fetterman’s campaign declined to answer DVJournal’s questions, it did send a statement to Fox News regarding the Reddit posts.

“John does not support a fracking moratorium or ban,” said campaign spokesman Joe Carvello. “John believes that we have to preserve the union way of life for the thousands of workers currently employed or supported by the natural gas industry in Pennsylvania and the communities where they live. We can’t just abandon these people, and tell them to go learn how to code.”

The confusion as to where Fetterman is on fracking runs counter to information on Fetterman’s website.

“You’ll always know exactly where I stand,” says Fetterman in the “Issues” section of his website. “I haven’t had to ‘evolve’ on the issues because I’ve always said what I believe is true and I’ve been championing the same core principles for the last 20 years.”

If Fetterman is opposed to fracking, be it in all forms or new fracking permits, the Senate candidate may face an uphill battle with some voters.

“Opposition to the development of Pennsylvania’s energy resources is contrary to common sense and the desires of most people,” says Gordon Tomb, senior fellow for the Harrisburg-based Commonwealth Foundation. “A recent poll report says nearly 70 percent of voters favor natural gas production and that 73 percent favor more pipelines.”

Regarding the poll, Toby Rice of EQT Corporation, a leading independent natural gas production company with operations focused in the cores of the Marcellus and Utica Shales, said Americans are recognizing the tremendous impact natural gas can make in our efforts to provide the world with energy security, lower energy prices, and inflation and address climate change.

“These poll results demonstrate that Americans want more natural gas production and support the infrastructure needed to make it a reality.”