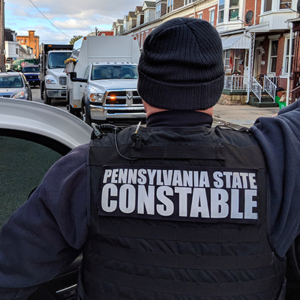 Attorneys for two constables charged with wrongdoing while providing independently contracted security services for Mariner East pipeline construction are asking a judge to throw the case out.

The move comes just weeks after a different magisterial district judge dismissed all 54 felony counts against Frank Recknagel, a security manager for the pipeline who prosecutors had alleged organized the security detail.

In Pennsylvania, constables are elected peace officers who mainly serve the state’s lower judiciary system, acting in a capacity similar to a deputy sheriff.

In August of 2019, the Chester County District Attorney’s office charged constables Michael Robel and Kareem Johnson with misusing their authority by working as “hired guns” for pipeline security.

While it’s common for constables to perform private security work, the DA’s office alleged the security manager was trying to buy the perception of police enforcement when Johnson and Roble wore their constable vests while on the job.

The motion to dismiss disputes that.

“Constables, police officers and/or sheriffs do not have to hide their credentials in order to perform non-judicial work,” the filling argued.

“Constables do not have an official uniform and uniforms may vary according the tastes of the individual and circumstances of the job. To the point, discovery provided by the Commonwealth does not suggest that either Defendant asserted that they were working for a particular court or courts.”

Casey White, the attorney representing Johnson, said he and the attorneys for Robel had the motion to dismiss paperwork already prepared some time ago, and then felt encouraged to file it after all the charges were dismissed against Recknagel.

“Mr. Recknagel, through the entirety of this project was working hand-in-hand with all types of law enforcement — state police, local police — and he was asking advice on what he should do to maintain the safety of the people working on the project as well as the homeowners,” White told Delaware Valley Journal.

In dismissing the charges against Recknagel, Magisterial District Judge John R. Bailey emphasized that very point when highlighting a string of emails he believed showed no criminal intent.

“I just don’t see the deception where all these people are cc’d [on emails] by the defendant [Recknagel], even Pennsylvania State Police, not only in-house counsel but also other attorneys. I was expecting to see something else which I didn’t have,” Bailey said.

“These are serious charges, and if I have to look at Frank Recknagel in this case and this case only, I find it very difficult to believe the Commonwealth has made a prima facie case,” he concluded.

Other charges against the two constables allege they concealed their income from the security work by not listing the payments on mandatory disclosures for public officials. But White chalks this up to a misunderstanding, adding that the Chester County DA’s office went out of line by charging the constables over this alleged infraction in court.

The district attorney is claiming the non-disclosure was part of a larger pattern of attempting to hide the payments so the alleged scheme would not be uncovered.

White said the constables did fail to identify the payments, but the place to address this is within the state system not the criminal courts.

“So, by filing these charges against Mr. Roble and Mr. Johnson, [the DA’s office] completely circumvented the ethics act — that’s unfair to them, and it’s not right. Their due process rights were violated.”

The original charges were brought when Tom Hogan was still the Chester County district attorney. He did not run for re-election and was replaced by Deb Ryan in January.

A spokeswoman with the Chester County DA’s office said it would not comment because the defendants are awaiting trial.

The next hearing for the case is scheduled for Aug 31, according to White.