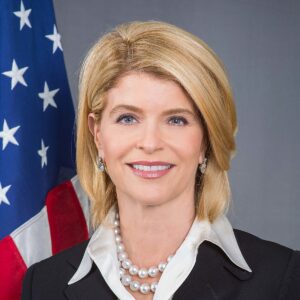 Carla Sands, a Republican running for the U.S. Senate, came out swinging against her opponents during a podcast interview with the Delaware Valley Journal on Thursday.

Sands, former ambassador to Denmark under President Donald Trump, responded to questions about the former president’s endorsement of Dr. Mehmet Oz by attacking the ‘America First’ bona fides of her GOP primary opponents.

Oz “chose to serve Turkey first, not America first. Even though he says it, he actually chose as an American citizen to go fight for Turkey in the Turkish military, not the American military,” Sands said, a reference to Oz performing his required military service in Turkey to maintain his dual citizenship. (Oz was born in Ohio.)

And regarding another competitor with ties to Trump, hedge fund CEO Dave McCormick, she said he had “shipped jobs out of Pennsylvania offshore. And that’s what’s devastated Pennsylvania over the last 40 years. I would say he’s closer to Beijing than he is to D.C.”

McCormick “chose to invest not in America but in China. And you don’t make a lot of money in China without the support of the Communist Party because they control the economy in their country.”

Oz has said that if elected, he will renounce his Turkish citizenship. Oz said he has kept his dual citizenship so he can travel to Turkey more easily to visit his widowed mother, who has Alzheimer’s. His parents, who were immigrants, retired to their home country.

“Dave has always fought to keep jobs in Pennsylvania and never outsourced any jobs. At FreeMarkets, Dave was a part of creating over 600 jobs in Pittsburgh, contributing to the economic revitalization of the Steel City,” Jess Szymanski, a McCormick campaign spokesperson said in response. And Sands’ allegations regarding China are not true, she said.

Asked about Trump’s recent endorsement of Oz, Sands said the former president “has not always been getting the best advice,” and that she is the one who can beat Democrat frontrunner Lt. Gov. John Fetterman, who she said was a “strong candidate.”

“The Democrats love him, and they’ve become radical,” Sands said.

Asked about rising inflation, Sands noted it has hurt “working families and our seniors on fixed incomes are suffering across the commonwealth because the radical Biden administration has been passing these big, bad bills. They’re multi-trillion-dollar bills stuffed with the Green New Deal, socialist regulation, attempting to regulate our farmers, our energy sector, really, every single area of our lives. They want to set the thermostat in our homes. We have to say no. And I will stop the out-of-control spending in Washington. That’s the number one driver inflation started off as soon as (Biden) got into office with his radical policies. But the second, the kerosene on the fire of the inflation is his war, the Biden administration, and the left’s war on our domestic energy.”

Sands touted Pennsylvania’s energy resources and the need to extract the state’s natural gas and get it to market so that good-paying jobs will be available here and to stem the population drain that cost the commonwealth a congressional seat after the 2020 Census.

“I’ve called for an Operation Warp Speed for American and Pennsylvania energy that we harvest it,” said Sands. “We do it cleaner than anywhere else in the world, right here in America. And then we lay the pipes. But we’re going to need top cover from that…because we’re going have to unjam all the regulations, the bad regulations at the federal and state level. But we can do this.”

Reminded that some Delaware Valley residents have vehemently opposed new pipelines she said, “Here’s the beautiful thing about federal power. If we have an ‘America First’ president in the White House, and we have an emergency for our energy because we don’t want to import Russian, Venezuelan, or Iranian energy, which is what the radical Biden administration is literally proposing. We need to have it domestic it’s cleaner here. And it also is economic security, but national security because Putin showed us, energy’s not just a commodity, it’s a weapon. And we need this for our security and the security of our allies.”

Sands also said Trump would have won the 2020 election if not for the interference of American “oligarchs” like Mark Zuckerberg.

“I refer you to Sen. Rand Paul,” she said. The Republican senator from Kentucky said the 2020 election was stolen. “He said, we did a forensic analysis. And if Mark Zuckerberg and his family’s money that went into that nonprofit and funded how the election was held did not go into the election, Donald Trump would be president today. So the Zuck bucks stole the election.

“There were other things that went on. We know where there’s smoke, there’s fire. But Rand Paul, a sitting senator, said the election was stolen by the Zuck bucks,” said Sands.

Sands started her career in chiropractic medicine, like her father and grandfather. She married Fred Sands in 1999 and after he died, she became the first woman to serve as chair and CEO of Vintage Capital Group, her late husband’s company.