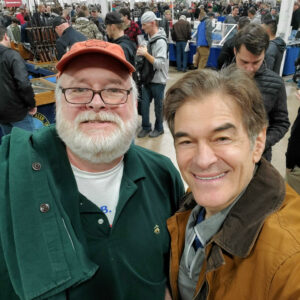 “This is all about winning elections in order to stop the Radical Left maniacs from destroying our country,” Trump said in his statement. Oz is “pro-life, very strong on crime, the border, election fraud, our great military and our vets, tax cuts and will always fight for and support our under-siege Second Amendment,” Trump added.

“Dr. Oz is smart, tough and will never let you down, therefore he has my complete and total endorsement.”

Oz is engaged in a high-profile campaign ad war with former hedge fund exec David McCormick, who has his own connections to Trump and had clearly hoped he would get the former president’s backing. McCormick’s wife, Dina Powell, served as a deputy national security adviser in the Trump administration.

But it may have been Trump’s wife, Melania, who had the most influence. A source close to Trump told NBC News, “The first lady has let the president know that she likes Dr. Oz. And that matters.”

Oz thanked Trump for his support.

“Everyone, especially David McCormick – a pro-China, Wall Street insider, wanted this endorsement. But President Trump wisely endorsed me because I’m a conservative who will stand up to Joe Biden and the woke left,” Oz said in a statement.

“As Pennsylvania’s next senator, I will defend America First policies,” said Oz. “I will fight to unleash American energy, protect our Second Amendment, and drain the swamp of Washington insiders. I will be a powerful pro-life voice in the Senate, and I will protect our children from harmful woke indoctrination. And no one will fight harder against the radical policies of Joe Biden that are causing inflation, creating a crisis at our border, and weakening our position around the world.

“President Trump knows how critical it is to change the kinds of people we send to Washington. I’m ready to fight. I thank him for that, and I am proud to receive his endorsement,” Oz concluded.

GOP political strategists say it’s good news, but the race is hardly over.

“The Trump endorsement absolutely helps the undecided crowd who wanted Trump’s opinion before making their decision,” said Pennsylvania-based GOP strategist Charlie O’Neill. “However, I wouldn’t call the race yet. With five weeks to go, anything can happen. Oz and McCormick have spent millions defining each other, which has certainly had an effect on polling. Trump’s endorsement adds a new line of messaging for Oz he hopes will be a final blow. However, I don’t anticipate any of McCormick’s endorsements from former Trump officials to go anywhere, and he’ll continue to lean on them.

Not everyone in Trumpworld is happy with the president’s decision. Steve Bannon, who served as Trump’s White House chief strategist, is no fan of Dr. Oz, as he expressed in a recent podcast: “How does Dr. Oz, probably the most anti-MAGA guy, and you got Fox nonstop pimping this guy out and Newsmax pimping this guy out, and that’s what it is — how does Dr. Oz, from New Jersey, [Turkish President Recep Tayyip] Erdogan’s buddy, floating in from Jersey, how does he become a factor in a Senate race in the Commonwealth of Pennsylvania?”

“In the off chance he gets elected, he would make Mitt Romney seem like Lauren Boebert.”

In his announcement Saturday, Trump repeated a theme he has mentioned several times regarding Oz’s candidacy: His appeal to women voters thanks to his TV persona. “Women, in particular, are drawn to Dr. Oz for his advice and counsel. I have seen this many times over the years. They know him, believe in him, and trust him.”

McCormick’s campaign responded to the Delaware Valley Journal’s request for a comment with a link to a from Jeff Roe tweet: “@DaveMcCormickPA is going to be the next Senator from the Commonwealth of Pennsylvania.”