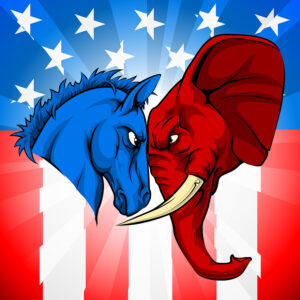 A Democrat from Pennsylvania may be in the White House, but the GOP wants to Make the Delaware Valley Republican Again. And based on the data from 2021 – and polling on 2022—it may be on its way there.

Both Republicans and Democrats who spoke with Delaware Valley Journal agree southeastern Pennsylvania is a competitive political battleground. The question is whether the four-county region’s future looks more like solidly-blue Montgomery County, or is trending back to red like Bucks County.

The region’s shift toward Democrats over the past two decades is undeniable. At the presidential level, only Chester County has backed a GOP nominee since 1996 (George W. Bush, and Romney – by just 0.5 percent, in 2012.)

One election result that reflects the DelVal’s partisan breakdown was the vote in May on ballot questions to limit the governor’s emergency powers. Both ballot questions were defeated here, but they won statewide in the wake of Republican allegations of abuses by Democrat Gov. Tom Wolf.

The vote was part of the primary election ballot, so the results are somewhat impacted by the lack of competitive races on the GOP side, but the margins are telling.

In GOP-leaning Bucks, the ballot question narrowly lost with 49 percent of the vote. In Chester and Delaware, it received around 45 percent. In Montgomery County, the “yes” vote couldn’t break 40 percent.

Six months later in the November election, the breakdown was similar. But, Republicans note, the margins were closer.

“Bucks and Chester [Counties] have shown they’re back to being purple,” veteran political strategist Chris Nicholas told Delaware Valley Journal. “And Republicans in Delaware County have made strides, too. Delco and Chester aren’t back to parity, but Democrats can’t take them for granted, either.”

Varad Mehta, a writer and historian who follows politics from his suburban Philadelphia home, agrees.

Still, Democrats have plenty to cheer about. In Chester County, Democrats are celebrating the fact their party voter registrations have surpassed the GOP for the first time since the Civil War. As recently as 2018, county statistics showed Republicans with a 15,000 voter registration advantage. Today, Democrats control county government, and they held on to all the row offices in November’s elections.

But could the tide be turning? With polls showing Biden’s ratings plunging, area Republicans are feeling good about the future.

“The GOP in Bucks and Chester counties have a real pulse,” Nicholas said. “The great environment Democrats had in 2017-18 is swinging back.”

And one issue Republicans believe will give them a suburban boost is education.

Republicans saw major wins in area school board races across the region, noted Phil Valenziano of the Republican National Committee, who believes voters are identifying with the GOP’s message of empowering parents to make decisions when it comes to their children.

“With crime on the rise in Democrat-run cities like Philadelphia, where homicides surpassed a grim record, voters know that Democrat policies are making their communities less safe,” the Pennsylvania GOP said in a statement. “Republican enthusiasm is on the rise and accountability is coming for Pennsylvania Democrats, as evidenced by the red wave that swept the Philadelphia suburbs in November.”

The GOP trend in the Delaware Valley reflects the mood of voters statewide, Valenziano said.

The Republican Party is also reaching out to people that have not traditionally been part of their coalition.

“You saw a lot of this with the Trump campaign last year, but nationally, the Republican Party has made a concerted effort to reach out to non-traditional groups or groups that are not traditionally Republican voting groups, and I think we’ll see that continue,” Valenziano said. “The proof is in the pudding, as we won 3 out of the 4 judicial races, we had incredible wins all across the state, and 24 county-level Democrats running for re-election are now updating their resumes.”

Other Republicans weren’t as positive about former President Donald Trump’s impact on the local GOP.

A Delaware County Republican who asked to speak off the record was blunter: “Trump was a disaster in 2018. Working the polls on Election Day, we saw longtime Republican voters saying ‘I like my state Rep., but I can’t vote for them because they’re Republican.”

As for the GOP’s ongoing strength in Bucks County, the Republican pointed out a built-in advantage: “They have [U.S. Rep.] Brian Fitzpatrick at the top of the ticket. That’s a wonderful thing.”

Now it’s Democrats who may have a top-of-the-ticket problem: Joe Biden. A November Morning Consult poll found Biden’s approval in the Keystone State is underwater by five points. A new Morning Call/Muhlenberg poll found just 40 percent of Pennsylvanians approve of his handling of COVID-19, down from 55 percent in the fall.

“A lot of things are dependent on how the president is doing,” says Mehta. “If he’s unpopular, people running on his party will have a tough time.”

And some political insiders question how important the region is to the state’s politics. Once viewed as the ‘kingmaker corner’ of the state, strategist Charlie O’Neill notes Republicans are still winning despite the DelVal’s Democratic turn.

“From a statewide perspective, the idea that Philadelphia and the collar counties can anchor a statewide victory isn’t ringing as true as it once did,” O’Neill said. “In 2019, Megan McCarthy King won a statewide Superior Court race. In 2021, Megan Sullivan was elected to the same bench, along with Kevin Brobson and Stacy Wallace. And let’s not forget, Republicans went two for two in statewide elections in 2020.

“Since 2018’s drubbing, Republicans are six for 10 in statewide elections. That’s as purple as you get. Many suburbanites may not like Trump, but they’ve shown they aren’t too fond of Joe Biden and the Democrats, either.”