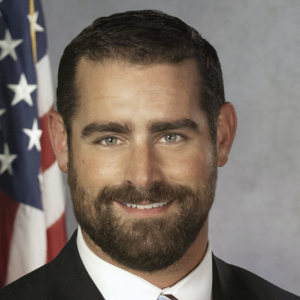 His name is Brian Sims, a Democratic state rep re-elected to his fifth term last November for the 182nd District which includes parts of Center City and South Philadelphia.

Sims’ election to the General Assembly in 2013 was a real victory for LGBT Pennsylvanians. The son of Army officers received worldwide attention for being the first openly gay person elected to Pennsylvania’s legislature.

The historic event was welcomed by many, even if the woman he defeated was perceived as progressive and open-minded. Babette Josephs had been a familiar face on Philadelphia streets for years and she had seemed undefeatable — until Sims decided he had to run.

Sims told NBC News in 2018 that when he told Josephs he was planning to challenge her in a primary she told him to “go f—k himself,” which Sims says “I even kind of liked.” In explaining that comment, Sims mused, “I have a mouth like a truck driver.” Sims won the district by 233 votes.

Over time, the truck driver in the new state representative became apparent. Not that a big mouth sometimes wasn’t warranted, mind you. After all, being the first out gay state representative comes with various downsides, such as the death threats he says he has received which usually begin with a, “Hey f*g…” That’s enough to get anyone’s dander up. It’s rude and it’s impolite. The thing to do is to stick to the issues without stooping to personal attacks.

“I’m here to do a job,” Sims told the LGBTQ publication, MetroWeekly, in 2019. “One of the side effects of having to do this job in this era, in this time period, is that I have to do deal with an inordinate amount of hate. You probably don’t know anybody that gets called a f*ggot as much as I do. You probably don’t know anybody, and you’ve probably not spoken to anybody that actually gets as many death threats as I do. That’s not something I take any pride in whatsoever, but I will tell you that it’s not because I’m sitting on my ass and doing nothing.”

Sims’ announcement that he’s running for lieutenant governor is controversial for one reason and one reason only: his inability to control his temper when it comes to issues he says he is totally committed to.  A heterosexual man with similar anger control issues would be just as suspect if he did some of the things that Sims has done since he’s been in the legislature.

In 2018, Sims posted a picture of himself giving the middle finger to Mike Pence when the Vice President was visiting Philadelphia. The picture was circulated widely and was praised by many activists, though critics called it silly and said showed the representative’s immaturity. In many ways, the gesture was indicative of someone who has turned his political beliefs into an orthodox religion. Sims, who is agnostic, has said: “I’m the only member of our legislature that doesn’t swear in on a book of faith; I swear in on a copy of the constitution.”

This raises the question: Can a rabid ‘Constitution-thumper’ be just as dangerous as a rabid ‘Bible-thumper’?

In May 2019 Sims apologized for a string of verbal assaults directed at pro-life activists outside Planned Parenthood at 12th and Locust Streets.  Sims filmed himself berating a woman walking by herself and praying, telling her that what she was doing “was not Christian.”

The state rep then filmed four young teenage women and offered viewers– his fans– $100 if they can identify them. Sims’ tweet on May 2 summed up his beliefs about the protesters: “Push back against Planned Parenthood protestors, PLEASE! They prey on young women, they use white privilege, & shame. They’re racist, classist, bigots who NEED & DESERVE our righteous opposition. Push back, please! “

USA TODAY published an opinion piece by Ashley Garecht who recalled what happened outside Planned Parenthood. “We were praying a rosary at the corner of the Planned Parenthood property line when a man approached us, yelling angrily at me and at the teenage girls with me. I found out later this man was a Pennsylvania state representative, Brian Sims.”

Sims apologized for his actions. “I should not have disrespected  Planned Parenthood’s policies of not engaging with protesters. For that, I’m absolutely sorry,” Sims said. “My emotions took over because I was, and am, angry.”

In August 2020 Montgomery County State Representative Thomas Murt filed a police report stating that Sims phoned him at home and filled his ear with a “vitriolic, profanity-filled” rant. Murt says he had no idea what Sims was angry about and that the representative wouldn’t tell him when asked.

Later, Murt assumed Sims’ anger had something to do with an LGBTQ bill that he [Murt] needed co-sponsors for. But even that was puzzling since Murt claims he and Sims are on the same page when it comes to LGBTQ rights. Murt, feeling fearful that something else would happen, called the Upper Moreland Police, and then contacted Frank Dermody, the top Democrat in the House of Representatives. Dermody did not pursue the issue and Sims later denied in a tweet that he ever said “these things to Tom or anyone else.” That tweet was later deleted.

The latest eruption from the representative from Philadelphia occurred when Sims accused House Republicans of knowing a legislator had contracted COVID-19 but not telling fellow Democrats. With a handful of Democratic colleagues, Sims called for an investigation. But state Attorney General Josh Shapiro did not take up the offer.

“Putting the lives of Members and our families at risk to repeatedly tell the lie that Covid-19 isn’t a risk, while hiding life and death information from us, is beyond all American values and partisanship I’ve ever contemplated,” Sims stated.

Sims is now planning his 2022 run for lieutenant governor and his campaign Facebook page is filled with congratulatory messages.

“We need adults in the room, and I want to bring bold visionary leadership based on lived experience and shared values to the Commonwealth,” Sims said in a recent video.