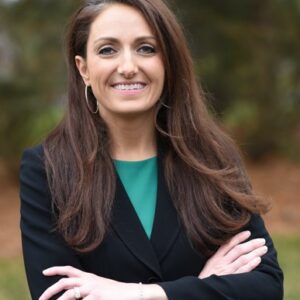 Fresh off her wins with the pro-parent Back to School PA PAC, Horsham resident Clarice Schillinger is launching a campaign to be Pennsylvania’s next lieutenant governor.

Schillinger, 34, who also founded Keeping Kids in School PAC, which backed school board candidates in the spring 2021 primary, said she plans to take an education reform agenda to Harrisburg.

“I plan to advocate for a total revamp of our education system,” she told Delaware Valley Journal.

“Clarice has established a powerful track record of achieving real change through her work at Back to School PA this past year,” said Paul Martino, a Bucks County venture capitalist who co-founded Back to School PAC. “Electing her will ensure that education is the top priority in Harrisburg for these next four years. Pennsylvania needs a lieutenant governor that is ready to work and fight for business owners, taxpayers, parents, and students.

“Clarice is a political newcomer who has already demonstrated she will put these everyday people first,” he said.

She says she also hopes to reduce regulations on businesses and improve public safety by “supporting our men and women in blue.” A priority is “making sure our communities are safe and attractive for people to want to come to Pennsylvania and live, and not move out of.”  The U.S. Census estimated Pennsylvania lost 30,878 residents in 2021.

“I created this groundswell of parents and it just seems appropriate to run for statewide office and take their voice to Harrisburg,” Schillinger said, adding that she believes voters want “someone who is not a polished politician.” She’s the mother of two: Lexi, 15, and Mike Jr., her stepson.

“I’ve worked in politics but I’m a mom and I care about our government. We have to take it back from special interest groups and lobbyists,” she said. “Sometimes it takes a mom to clean up a mess like that and that’s what I plan to do,” said Schillinger.

Schillinger started her public advocacy fighting to clean up the now-shuttered Willow Grove Naval Air Station where various chemicals leaked into the groundwater leading to cancer clusters in Horsham, Warminster, and Warrington.

Schillinger later worked for state Rep. Todd Stephens, (R- North Wales) helping him pass legislation to remove contaminants from people’s wells. While she knows her way around politics, this is her first run for public office.

Schillinger’s husband, Mike, who owns a carpentry business, is supportive of her political career. “He says, ‘Go save the commonwealth and do what you have to do,’” she said.  Her kids are also behind her campaign.

But Schillinger has the same concerns as every working mom. For example, she makes a week’s worth of meals on Sundays and freezes them so she knows her family will have good meals while she’s out campaigning.

Schillinger believes the state can do better than it has lately under Democrats Gov. Tom Wolf and Lt. Gov. John Fetterman. (Fetterman is running for the U.S. Senate).

Schillinger fought to keep schools open for her children so they could get their education and “access to the American dream.”

“It’s just doom and gloom,” she said about the Wolf administration. “Everything is falling apart. And all these negative responses: ‘No, don’t open schools. No, don’t open businesses. No, don’t leave your house.’…Instead of using the tools and resources and science and solutions.”

“We’re Pennsylvanian. We’re Americans. We find solutions. We persevere. That’s what our nation was founded on,” said Schillinger.

Schillinger has also faced adversity and persevered in her own life through grit and determination.  The Montgomery County Community College graduate found herself pregnant at 18, but kept and raised her daughter, and prospered.

“While leading Back to School PA, I connected with thousands of parents across the commonwealth with the same mission as me – to make a better life for their children. The current administration has abandoned all of us, siding with special interests and lobbyists over our families. It is time we have a voice at the decision-making table to advocate for real people with real problems,” Schillinger said in a statement. “That’s why I’m running. I will be your advocate, the advocate for students and parents, the advocate for business owners and taxpayers.”