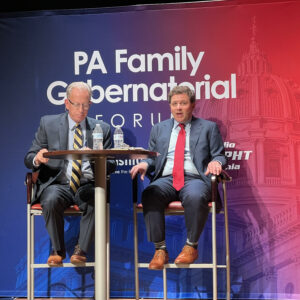 YouTube has admitted it made a mistake when it pulled the video of a  Republican gubernatorial candidates’ forum sponsored by the Pennsylvania Family Institute and held recently at Cairn University in Langhorne.

“When it’s brought to our attention that a video has been removed mistakenly, we act quickly to reinstate it. We also offer the uploader the ability to appeal removals, and upon review of the Pennsylvania Family Council’s appeal, we reinstated this video,” said Ivy Choi, a spokeswoman for YouTube.

Michael Geer, president and CEO of the Institute, is happy the video is back up but says is also disturbed it was removed in the first place and remained missing for three days.

Geer says he believes public pressure from the Delaware Valley Journal and other sources may have helped sway YouTube. But, he noted, social media such as YouTube, Twitter, and Facebook have become the public square and speech exercised there should fall under First Amendment protections, even though the entities are owned by private companies.

“The marketplace of ideas has shifted to the social media realm,” said Geer. “And social media companies have a special relationship with the government. The government is providing a special framework for them to operate. And if they didn’t provide the level of freedom and First Amendment accountability, something should be done.”

As it is now, social media platforms have “the unfettered ability to take things down that they don’t like.”

“We’re grateful to the candidates, who put it out there in press releases and social media comments, as well as the wrongness of what YouTube did. I think the public outcry and folks like you reporting on it, bringing attention to it, were all very helpful in the restoration of the video.”

Linda Kerns, a Philadelphia lawyer who handles election law cases, said, “I attended the Republican gubernatorial debate and heard a robust discussion of conservative ideas to fix this commonwealth after we have endured the failed policies of a Democrat administration. I imagine the woke ideologues at YouTube realized if people hear what Republicans have to say….they will never vote for a Democrat again. So their answer is censorship.  Thank heavens for Rich Zeoli who publicized this travesty on his radio show and outlets like DVJournal…who write about it.”

Dave White, one of the gubernatorial candidates who participated in the forum, denounced YouTube’s move as “another example of the leftists in Big Tech trying to silence conservatives, specifically traditional values conservatives. Apparently, standing up for the sanctity of human life and defending the rights of young girls who want to play sports is out of bounds for YouTube.”

His fellow GOP candidate Charlie Gerow said it was “an outrage. As soon as they did it, I spoke out forcefully against their attack on free speech. Attempting to silence the voices of the Republican candidates is yet another example of the cancel culture that is ripping us apart.”

At a debate Tuesday night sponsored by the Delaware Valley Journal, Republican candidates for U.S. Senate weighed in.

“The overwhelming majority of our [exercise of] free speech, which is a constitutional right, takes place on social media. So for tech companies to be able to tell people, ‘Shut up, sit down, and do as you’re told,’ doesn’t cut it. We need to be very firm on that,” said Kathy Barnette, a Fox News commentator.

But lawyer Sean Gale was not sure it would be wise for the government to intervene. However, he decried the hypocrisy of companies like Twitter, which banned President Donald Trump.