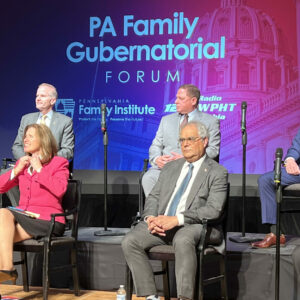 In the latest incident of Big Tech appearing to target Republican politicians, YouTube has pulled down the video of last week’s GOP gubernatorial debate hosted by the Pennsylvania Family Institute.

“In a stunning and scandalous attack on a fair and free democratic process, today YouTube took down the recorded livestream video of Pennsylvania Family Institute’s Gubernatorial Candidate Forum,” the group said in a statement.

The forum drew seven of nine Republican candidates for governor to Cairn University in Langhorne on March 24.

The Delaware Valley Journal covered the two-hour forum, which was also broadcast over Philadelphia radio station WPHT and via live stream.

Pennsylvania Family Institute President Michael Geer was outraged by the action. “YouTube offered no specifics of what is alleged to be in violation, beyond indicating that it had to do with content related to the 2020 presidential election,” said Geer, who was a co-moderator of the forum with radio host Rich Zeoli. “That election was not mentioned in our questions, and we can only conclude that the YouTube censors did not like the answers given by one or more of the candidates.”

“This is a blatant assault on free speech, free elections, on the ability of candidates to freely state their views,” Gree continued, “and on the right of citizens to hear the varied perspectives of those who are seeking their votes. It hinders the process of democracy, shuts down the free marketplace of ideas, and ironically, further erodes confidence in our elections.”

Dave White, one of the candidates who participated in the forum, denounced YouTube’s move as “another example of the leftists in Big Tech trying to silence conservatives, specifically traditional values conservatives. Apparently standing up for the sanctity of human life and defending the rights of young girls who want to play sports is out of bounds for YouTube. The beauty of our First Amendment is that it is not simply freedom of speech, but the freedom to exercise that speech, which includes making our voices heard at the ballot box. YouTube may be able to silence us on their platform, but they will not silence us this November.”

In fact, YouTube has not identified the specific content it found objectionable and did not respond to requests for comment from Delaware Valley Journal. Geer said the only input he had was YouTube’s reference to discussions of the legitimacy of the 2020 presidential election.

Another candidate, Congressman Lou Barletta, tweeted: “Big Tech is absolutely out of line censoring the @PFIpolicy Gubernatorial Forum from YouTube! I was proud to participate in this forum and discuss the important issues facing PA. Just because Big Tech doesn’t agree with our politics does NOT give them the right to silence us!”

Fellow candidate Charlie Gerow, a GOP consultant, said, “YouTube’s cancellation of the PFI Forum for the Republican candidates for governor is an outrage. As soon as they did it I spoke out forcefully against their attack on free speech. Attempting to silence the voices of the Republican candidates is yet another example of the cancel culture that is ripping us apart. We’re fighting back and won’t allow ourselves to be silenced, sidelined, or shut down.”

Greer said his organization filed an appeal with YouTube.