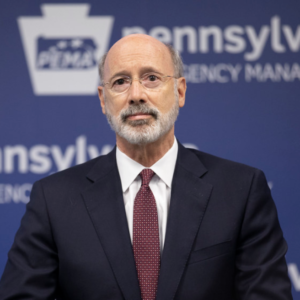 “The people of our Commonwealth have made it clear that they want an election system they can believe in,” Senate President Pro Tempore Jake Corman (R-Bellefonte) and Senate Majority Leader Kim Ward (R-Westmoreland) said in a joint statement. “In fact, election reform ranks among the most serious concerns of Pennsylvanians in statewide polling, including the 74 percent of citizens who recently voiced their support for voter ID, which is why the General Assembly addressed this important matter before the end of June.”

Wolf said on Twitter he made it clear he would not sign a bill that creates what he believes are barriers to voting.

“From signature verification to requiring voters to show identification when voting, the Voting Rights Protection Act included initiatives supported by the majority of Pennsylvania voters,” Grove added. “Since 2016, voters have made their frustrations over the wait times at polling places, confusing voting guidelines, and other issues known.”

“Governor Wolf’s veto of House Bill 1300 is a veto of election integrity and a veto of voters’ legitimate concerns,” Anderson added.

If you ask Grove, Wolf has “plugged his ears to their complaints when he vetoed the Voting Rights Protection Act.”

“It is a shame that he would deny counties their desired asks and turn a deaf ear to an overwhelming number of Pennsylvanians who support things like enhanced voter identification and increased accessibility through modernization by vetoing this bill,” added House Majority Leader Kerry Benninghoff (R-Centre/Mifflin). “That is especially true when he did not spend one minute of his time actually discussing it or negotiating it with the members who authored this legislation, despite their best efforts to reach out to him to do so.”

“Throughout 10 hearings on Pennsylvania’s election process, we heard time and again the need to fix flaws in our election,” said Grove. “Local election officials asked for the deadline to register to vote and the deadline to apply for a mail-in ballot be moved up so their staff has more time to do their jobs (and) the Voting Rights Protection Act would have done what people who work in election officials asked for but unfortunately, Wolf turned a blind eye to their requests.”

Still, Wolf maintains House Bill 1300 was a scheme by Republican legislators to suppress the freedom to vote.

“Pennsylvanians had a free and secure election, yet GOP leaders wasted the last few months spewing lies and chasing the conspiracy theories that drove this deceptive bill,” said the governor in another tweet. “While this bill includes some election improvements that I’ve called for, such as pre-canvassing time, it is riddled with voting barriers.”

Grove now plans to continue to seek solutions to the issues at hand.

“This will begin with the committee taking up Senate Bill 735 to require voter identification via a constitutional amendment.”

Ward is the author of Senate Bill 735. As reported in recent articles, Ward said her constituents want to know why they have to show ID to, among other things, get married, buy alcohol, adopt an animal, and or get a COVID vaccine but not to vote when they cast a ballot.

“I was elected to serve as the voice of my friends and neighbors in Harrisburg,” Ward said.