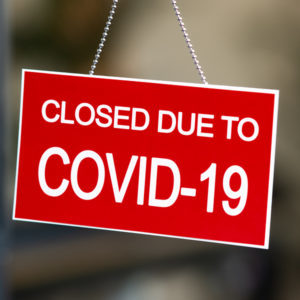 Temporarily closed sign for Covid-19 in small business activity. Information notice sign about quarantine measures. Close up on a red closed placard in the window of a shop for coronavirus.
News

When Delaware County finally emerges from Gov. Tom Wolf’s lockdown, some county employees may have a tough call to make: Go back to work and collect a paycheck, or stay home and collect even more?

When Congress passed emergency legislation to help keep the economy afloat during the coronavirus pandemic, one provision tacked on an additional $600 per week from the federal government on each unemployment insurance check an out-of-work person received.

In some cases, the weekly state unemployment money plus the additional federal stipend means some people could earn more by not working than by returning to their jobs. It’s a fact Delaware County Council Chairman Brian P. Zidek. highlighted when he announced the furloughs last month.

“If we could save the county money and not impact service in any regard, and actually enable employees to make more money, we thought that made for a win-win all the way around,” Zidek told the Inquirer.

In the private sector it’s becoming clear some employees are happy to stay home.

“Unfortunately, the feared impact of the flat $600 increase in unemployment compensation has become a reality,” said Gordon Denlinger, Pennsylvania’s state director of the National Federation of Independent Business (NFIB).

“We are hearing from scores of business owners who indicate that workers are doing the math and figuring out that, courtesy of the taxpayer, they are earning more on unemployment than when the COVID-19 crisis started.”

A recent NFIB national survey of business owners in the federation backs that up. When asked: “Has your business been directly impacted by the $600 supplemental UI payments?” more than 20 percent said an employee has either declined to come back to work or is staying in a job with reduced hours in order to continue on unemployment and keep collecting the extra $600.

“Sadly, the flat $600 bump in unemployment is going to keep doors closed and our economy shuttered,” Denlinger added. “There is probably no legislative remedy for it at this point, but one can hope that our elected officials realize the mistake they made and the damage it is doing to our small businesses in southeastern Pennsylvania.”

A recent study from the University of Chicago estimates that “68 percent of unemployed workers who are eligible for [unemployment insurance] will receive benefits which exceed lost earnings.”

A commenter on the Inquirer‘s story about the Delco furloughs drove straight to the issue: “I was naïve enough to believe that people who weren’t working weren’t getting paid. Silly me.”

“We’re not trying to send a message that it’s better not to work,” Zidek told Delaware Valley Journal.

The move also reinvigorates the critique about why governments have so-called “non-essential” workers at all. Zidek said the rationale for the furloughs boiled down to whether the job had a physical component that was essential to the duties.

“Those people that are able to work from home for their county jobs — for instance, probation officers, or people who work for children and youth services — they are still working for the county.”

It was only those “who had jobs that could not be performed at home” who were furloughed, Zidek said. He also pointed to the county’s services on updating passports and the weights and measurements offices, both of which require physical, in-person interaction.

Zidek added he would be very concerned about the incentive imbalance if it were indefinite, but said the federal bump is set to expire soon.

Wolf stoked controversy in May when asked about the backwards incentives.

“And as a former business owner, if you ever face that kind of situation [where an employee is making more on unemployment], there’s one really simple thing you can do as a business owner and that is raise the compensation of your employees.”

“It shows how out of touch he is with the normal, average, everyday business owner in this state,” State Rep. Steve Barrar (R-Chester/Delaware) told Delaware Valley Journal. “The government shut them down, they didn’t shut down on their own, they shut down because the government told them they had to.”