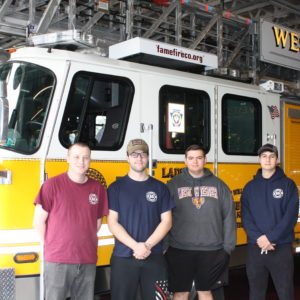 A fire company, like the Fame Fire Company of West Chester, does not last over 150 years without innovating.

Founded in 1838, Fame recently created a new incentive to attract volunteers. As a result of a multi-million-dollar building renovation, the 100 percent volunteer firehouse located just off of West Chester University’s campus recently launched its live-in program, offering free boarding to as many as six firefighter volunteers who, in exchange, commit 40+ hours of on-call time a week. The program’s aim was two-fold: reduce response times to emergencies and attract new volunteers, of which West Chester fire companies are in short supply.

President of the fire company Mike McCarthy’s involvement with Fame has spanned 30 years. He points to a number of factors impacting low volunteer numbers: people have less time due to multiple commitments; jobs today are more stressful and time consuming; people are more focused on the home; and volunteering is a fairly big commitment in itself, which has detracted many new volunteers from turning the role into a long-term volunteership. Fire companies need retention just as much as new recruits, McCarthy reflected. 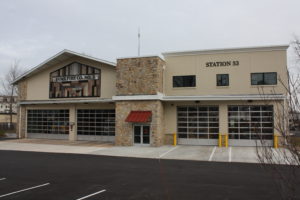 “The numbers have been declining sharply, Not to mention, too, the increase in population in West Chester,” McCarthy said. “We used to have a very neighborhood-oriented town…very volunteer-oriented. So when a call came in, people were one to two minutes, or one to two blocks, away from the firehouse and they could just run up, get on the fire truck and go.

“Now, the cost of housing is going up, and people can’t afford to live around the community anymore so they move out and farther away from the firehouse, and it takes them a little longer time to respond. Our response times are critical. There is a saying in an emergency, ‘Seconds count.’ So, by people moving away and it getting harder to get to the firehouse, we’re losing that response time.”

The live-in program launched in Nov. 2020, kills two birds with one stone. Already, response times have been cut in half and the program is at full capacity, with six live-in volunteers. Fame created the program as an ideal set-up for nearby students to replace a costly dorm. The suites rival West Chester dorms, with private, secured rooms, two full bathrooms, a private kitchenette, laundry and parking.

The pandemic, of course, altered how Fame operates. Family and friends are no longer able to visit the fire company, though this policy was altered later for the safety and benefit of the live-in volunteers. The live-in firefighters are allowed one guest each, who has to isolate as best as possible and only enter and exist through the front door. COVID-19 has also led to less interest from new members. 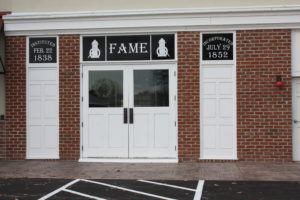 Currently, Fame has about 50 volunteers and averages 10 to 15 new members a year, though the pandemic has slowed recruitment numbers. Many new volunteers are students, temporarily residing in West Chester. 60 percent of all volunteers are under 30. The fire company has many committees for volunteers to involve themselves with. It isn’t just fighting fire, McCarthy commented. Fame works with volunteers to capitalize on their unique skill sets and experiences. “[Volunteers] bring what they can to the table and they’re all big assets, every one of them,” McCarthy said.

As for volunteer firefighters, Fame offers flexibility, working with volunteers on how many hours they can commit. “We take what we can get out every volunteer. Somebody had a good saying, “I can’t be here 100 percent of the time but when I am here I give 100 percent. We have guys who are there maybe 50 percent of the time, but when they are there. They’re doing everything they can to help out. They are giving their 100 percent,” described McCarthy.

Dan Dixon, the chairperson of the Living Committee leading the new live-in program, first started volunteering at Fame when he was a West Chester University student in the mid 70s. He reflected on how much the company has changed since, “It’s gone from a fly by the seat of your pants operation to a highly structured and exceedingly well-trained organization that rivals any professional, paid fire department…We always get the fires put out. It’s just now we’re getting them out in a safer environment for the individuals, and for the people involved.”

To learn more about the opportunities available to those interested in dedicating time to the Fame Fire Company, visit famefireco.org.