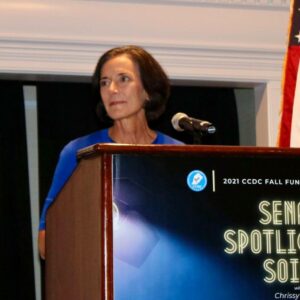 Valerie Arkoosh, chair of the Montgomery County Board of Commissioners, addresses a Chester County Democratic Party event on September 19, 2021.
News

Chesco Dems Chairwoman Charlotte Valyo also spoke at the fundraising event at the Desmond Hotel in East Whiteland Township, urging the party faithful to support the local candidates running in the upcoming local and county elections in November and to make sure they bring their Democratic-leaning friends to the polls as well.

U.S. Rep. Chrissy Houlahan (D-Chester) urged the group to unite after the primary. She said that while she did not want to be an “Eeyore,” it will not be easy to win the Senate seat and there are “huge opportunities to mess this up.” Also, it is possible the Republican gubernatorial candidate could hail from Chester County, she said.

“We must unify because, believe me, if I can tell you one thing coming from Washington, the Republican Party, they are fired up. There’s energy like we haven’t seen in the Republican Party in a few years,” Houlahan said. “And they are particularly fired up here in Chester County.”

As might be expected, all four of the candidates took shots at the GOP and not each other.

Lamb (D-Alleghany, Butler, Beaver) decried efforts by the state Senate to audit the 2020 election, saying it is “attacking our elections.”

“This is a full-scale attack on our voting system,” he said.

“Democracy was born here,” he said. “It was born as much in the coal mines as the Constitution. It was developed as much by the working men and women of our state as by the Founding Fathers. And so to be a Pennsylvania Democrat is to be not just for the right to vote, but the right to organize and bargain, the right not only to have a say in your government but in your workplace…To us political and economic democracy are inseparable.”

He said his grandfather, who voted for FDR, told him people want to feel their representatives “walk on their side of the street, like the good Samaritan. They don’t pass them by on the other side,” Lamb said. “What we’re basically about is people showing up for each other…No matter who you are, no matter where you live, no matter what you believe in or where you came from when you need somebody, Democracy to us means somebody showing up for you. And it’s the feeling you’re going to want to show up for somebody else.”

Arkoosh, chair of the Montgomery County Board of Commissioners, said that she’s running because, “in Washington when some people see a problem, instead of fixing it, they actually make it worse.” She cited issues such as minimum wage, the cost of childcare, abortion, and climate change, saying, “I have been a problem solver my whole life.”

She described her work as a physician, helping craft the Affordable Care Act — also known as “Obamacare.” As a county commissioner, she worked on the COVID-19 pandemic response as well.

“We’re considered the most likely seat to flip,” she said of the Pennsylvania Senate seat. President Joe Biden won last November because, “people like you did the hard work,” she said. She promised to raise the federal minimum wage, lower the cost of insulin, fix infrastructure and make sure every area has broadband internet access, and also “tackle systemic racism.”

“I have one other ace in the hole, which is I’m a mom to three kids. And so when those Trump Republicans start having their temper tantrums, I got this,” Arkoosh said.

Kenyatta had the audience on its feet, applauding and whistling in response to his remarks. He acknowledged the elephant in the room, whether he, as someone who is Black, gay, and from North Philadelphia can win a statewide election.

“This is a moment where we need to be very clear-eyed about who our nominee is going to be,” said Kenyatta. “We need to interrogate this idea of who is a safe nominee…We have 25 percent of my Republican colleagues who live full-time on Fantasy Island, that is their permanent address. We have 75 percent of folks who used to visit occasionally. But now they feel like they have to take up residence because they feel that is the only way to win a Republican primary.

“We have to be crystal clear about what we’re up against,” Kenyatta said. “They understand that if we secure the mechanisms by which people can engage in their democracy, the most powerful tool is the vote.”

“They want to shut you up,” Kenyatta said. “But Democrats aren’t going to shut up. We’re not going to be quiet about the issues that are facing Pennsylvania families.”

Turnout is key, he said, and primary voters should decide who can inspire Democrats to come to the polls.

The final speaker was Lt. Gov. Fetterman who said the Republicans’ election audit could create “the largest identity theft catastrophe in Pennsylvania history.”

“It’s all just some sad performance art in order for them to jump through as many hoops as Donald Trump wants them to do. They’re setting the table for 2024.”

Fetterman also targetted Toomey, calling him “a gifted political operative. He has managed to be reviled by both the left and the right. You have to work at that. Any one of the Democrats running for this seat is so much better than Pat Toomey that the difference cannot be effectively be measured by current science. But winning is important, too. And I’m proud to say, I’ve already won statewide.”

Fetterman encouraged the crowd to be bold in choosing their nominee, and not to compromise.

“Who in this room holds Joe Manchin up as their kind of Democrat?” Fetterman asked.

“Right now we’re not doing enough things because we haven’t scrapped the filibuster and we have to get that done. Because if we don’t do it now, when?