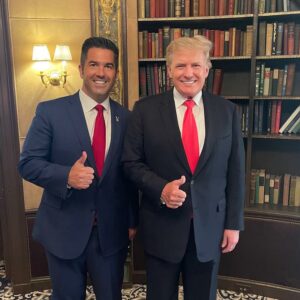 Trump praised Parnell, who was awarded two Bronze Stars and the Purple Heart for his service in Afghanistan, and took a swipe at President Joe Biden, saying, “unlike our present administration, he never left anyone behind.”

“He will make Pennsylvania very proud and will fight for election integrity, strong borders, our Second Amendment, energy jobs, and so much more. Sean Parnell will always put America First,” Trump said in his written endorsement.

“To say that I am proud of President Trump’s endorsement would be a massive understatement,” said Parnell. “President Trump kept America safe for four years, secured the border, made us energy independent, and protected the First and Second Amendment rights of all Americans.”

“The Biden administration has created crisis after crisis, leaving Americans behind in Afghanistan, drastically lowering our status on the international stage, and increasing the cost of living for Americans struggling to return to a pre-pandemic life,” Parnell added. “I look forward to winning this Senate seat, fighting to restore President Trump’s America First policies, and never leaving a single American behind.”

In a crowded primary field for the 2022 election where Pennsylvania Republican voters will determine who will get to vie to replace Sen. Pat Toomey, Parnell was just handed an ace. Or was he?

Some pundits believe lackluster support from suburban voters cost Trump Pennsylvania in 20202, so Parnell may need more than Trump’s backing to make inroads among more moderate voters in the general election.

But the Trump imprimatur may be just the ticket for Parnell to best his opponents in the primary.

A recently-released Franklin & Marshall poll showed there was no clear Republican frontrunner. It found Parnell at 10 percent, Kathy Barnette at 8 percent, and Jeff Bartos at 7 percent. But Trump’s endorsement may change that.

“I think President Trump’s endorsement makes Parnell the person to beat in the Republican Senate primary,” said professor Berwood Yost, director of the Floyd Institute for Public Policy and Center for Opinion Research which conducted the poll. “Trump voters make up the largest share of Republican voters, just under half, and these voters are deeply dissatisfied with the status quo and with traditional politicians. I think they are likely to show up in the primary. The benefit of former President Trump’s endorsement in a general election in a state like Pennsylvania is less clear, but I don’t think there’s much doubt that the endorsement helps Parnell tremendously in the primary.”

Barnette, an author and pundit, and Bartos, a Montgomery County businessman, did not respond to requests for comment from Delaware Valley Journal.

Former Ambassador Carla Sands said she would have appreciated Trump’s support, but understands he has had “a long-standing personal relationship” with Parnell.

“There is no one in this race that can match my demonstrated commitment to the America First agenda. The incredible people of the commonwealth of Pennsylvania want proven leadership in the Senate that they can trust to fight for the America First agenda. They know that I am that proven business leader and foreign policy expert, at a time when we desperately need both. Yesterday, today, and every day in the future, I am unwavering in my commitment to serving Pennsylvania in the United States Senate. We look forward to having the president on our team in the general election.”

“Once again, President Trump has turned a blind eye to the past and endorsed a former foe. Pennsylvania cannot afford to replace RINO (Republican In Name Only) Sen. Pat Toomey with another Republican who has a long, disgraceful history of Never-Trumpism,” Gale added.

After he being discharged from the Army with the rank of captain because of his wounds, Parnell returned to western Pennsylvania, earned a master’s degree in psychology at Duquesne University, and wrote a bestselling book, “Outlaw Platoon,” about his combat experiences, followed by three more books. Parnell also ran unsuccessfully for Congress against Connor Lamb, a Democrat who is also now running for the Senate. Parnell is the father of three children.

On the Democratic side, the same F&M poll found Lt. Gov. John Fetterman is the first or second choice of about one-third (30 percent) of Democrats, followed by U.S. Rep. Connor Lamb (14 percent).  However, two in five (37 percent) Democrats and two in three (63 percent) Republicans were undecided about their choice for U.S. Senate.